I have a story for you all.

I was driving my 1991 R4 Lider home, from the friendly local mechanic no less, and I lost first gear. I happened to be entering a roundabout, which was on an incline, so I was kind of trapped there with lots of other cars honking at me until I could finally manage in 2nd.

It doesn't seem to be a problem with the shifter or linkage. I can feel it going into each gear, but when I try to drive in 1st nothing happens, like I'm in neutral. All the other gears work fine, including reverse.

It rolls in 1st with the engine off as well. I lifted the hood and tried to shift at the trans by hand and it rolls when I put it in first there as well.

Has this happened to any of you?

Tomorrow or Monday I'll take the lid off of the trans and see what I can see. I expect broken metal bits, but its strange it didn't make a noise or any indication, just don't have first gear anymore.
J

Okay so I got the lid off the trans. The selector for first and second seems worn but that doesn't seem to be a problem. I don't see broken teeth or anything out of place with the gears.

I lifted one of the front wheels and started testing, sure enough its free-wheeling in first and not in any of the other gears. There must be something out with first. Not sure if a bad synchro could cause this?

The synchro would only make the gear difficult to select. If 2nd and 3rd gears work it's unlikely to be the selector. Can you select first gear and see what's happening with the cover removed with the front of the car raised off the ground and get someone to start the engine and then press the brakes?
J

Lifted one front tire, and the wheel spins in neutral and with first gear selected. In all the other gears it is stopped by the engine. I tried moving the selector back and forth while spinning the wheel and got it to catch in first just once. The rest of the time it just spins free. Only first gear.
J

I do have the cover off of the trans. I took that off before lifting and testing anything. I wanted to see if the selector was too worn or if I could see metal bits from a bad gear. The fluid doesn't look great but there's no chunks. The vehicle is new to me, I've only driven it about 4 times since buying it, and I hadn't had a chance to change the fluid yet.
J

Got the transmission out and dropped off at a garage. Should find out soon what the culprit was.
J

Finally got the transmission picked up today. Here are some photos of the culprit: 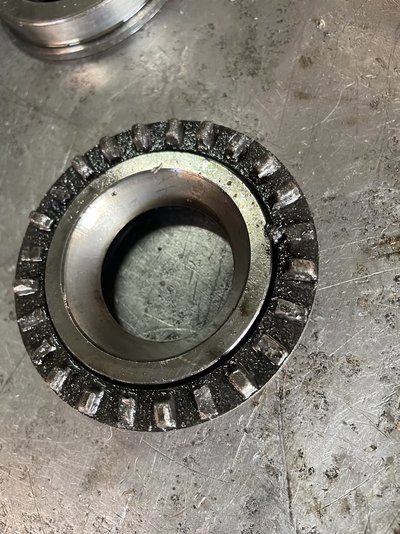 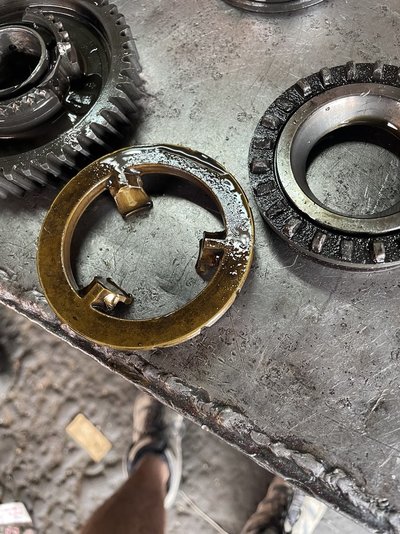 Got the car put back together and I still don't have first...

This gearbox lost 2nd gear suddently, just like yours did. Don't know more about its history, gearbox was given to me by a local garage in exchange for a good one I had. Pictured in comparison with good 1st gear, wear in coupling teeth is evident. 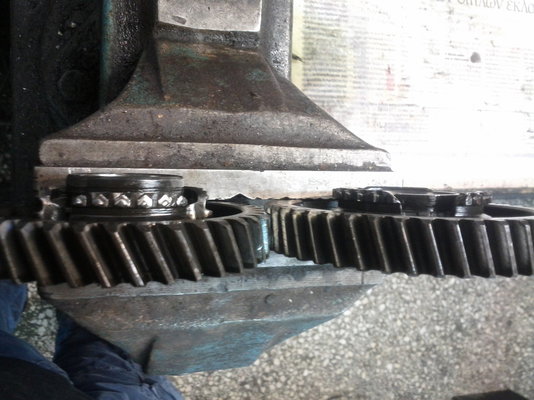 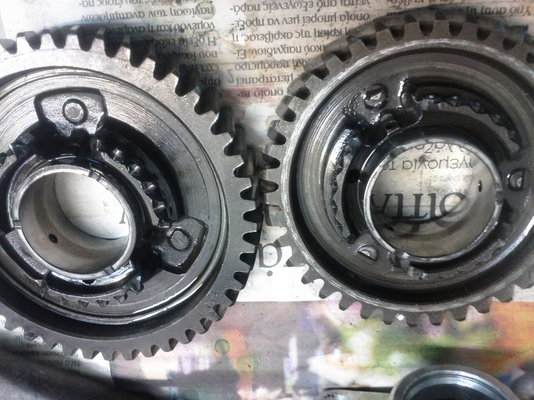 What did the garage that repaired the gearbox find? Didn't they test all the gears to check correct function?
J

angel said:
This gearbox lost 2nd gear suddently, just like yours did. Don't know more about its history, gearbox was given to me by a local garage in exchange for a good one I had. Pictured in comparison with good 1st gear, wear in coupling teeth is evident.

What did the garage that repaired the gearbox find? Didn't they test all the gears to check correct function?
Click to expand...

The pictures I posted where the items they showed me on the bench. They also replaced a couple bearings, the input shaft, and the fork/selector for first/second.

They didn't find anything wrong with the other gears, and I had no trouble driving it in anything but first.

Part of 1st photo has nothing to do with gear selection, it's simply a bearing retainer and teeth are there for a locking plate to catch on. Broken probably by an attempt to unscrew it by tapping.
I was meaning, didn't they test the gearbox after the repair?
J

angel said:
Part of 1st photo has nothing to do with gear selection, it's simply a bearing retainer and teeth are there for a locking plate to catch on. Broken probably by an attempt to unscrew it by tapping.
I was meaning, didn't they test the gearbox after the repair?
Click to expand...

Interesting. Well the full story is that I lost first and managed to limp home as I said.

The next day I went out looking for a place that would check out the transmission. As you know, I'm mechanically inclined, but without my tools or a good place to work here in Colombia, I'm forced to outsource a little bit. I took the top off the trans and saw that the selector was worn, but I could put it in first with the top off and everything still spun.

There were a few places that could look at the transmission but most people were busy and their lifts were full, so I came up with the idea to save a few bucks and take the transmission out myself and just bring it to someone who could go through it on their bench, instead of leaving the whole car at their shop for a week or more.

So I took the transmission out and brought it to this place, a brother of a friend of a friend, and we played with it there on the bench, and sure enough 1st gear was working, or seemed to be, you could turn the input shaft and watch the differential try to spin the axle.

So this guy tells me hey there's nothing wrong with the transmission, you better check the axles and the clutch.

And of course, 1st gear was the one I had trouble with, not any of the others, and not reverse. So I told him, hey if there was something wrong with the clutch or one of the axles wasn't in all the way, why would it just be first gear. So they said they'd disassemble the trans and see if they found anything wrong. I thought maybe something was loose that fell back into place in transporting the transmission there and that's why it was working again. Also, we did have an instance there checking on it where we put it in first and we couldn't get it out, the shifter was stuck. So I was convinced there was something internally wrong with the trans.

I went home and of course the teeth on the axles weren't chewed up and I know that neither was loose from taking the transmission out. And the clutch was in decent condition, but I went and had the flywheel resurfaced anyway and a new clutch kit because parts are economical here and when you have the trans out you might as well.

About 3 days later I got the call that they had finished the trans, I went and they showed me those parts on the bench that I have the picture of. They also told me they replaced the input shaft, a couple bearings and the worn brass selector for 1/2. I went home and it was pouring rain here, but after a few days of working in the rain (on my back in the parking lot) I got the trans back in, and lo and behold, no drive in first.

Called those guys up, they told me to bring them the car. So I made it there in second and up, its a few km. Left it there two days ago and I haven't heard anything yet.
You must log in or register to reply here.
Share:
Twitter Reddit Pinterest Tumblr WhatsApp Email Share Link
Community platform by XenForo® © 2010-2021 XenForo Ltd.
Top