Greetings to everyone, and apologies for the belated introduction. This might be a bit of a long one...
I have been a Renault 4 fan since 1985-ish when my mother took delivery of a red 1975 TL (known as "the Redcurrant") that had belonged to an elderly friend of my grandmother. I was only about 7 years old then... but I was smitten! It had been fitted with a Webasto sunroof, and I was the envy of all my primary school friends because I could stand on the passenger seat and wave at them through it! However...
In 1990, much against my wishes, it was traded in against a new Rover Metro! Argh the shame (at the time)! But I sucked it up, and that was that. Mum had advanced into old-fart's-motor territory, and seemed to like it.
By coincidence, the Rover dealer from which she bought the Metro had traded the R4 back a local Renault garage, where it had been looked after during her ownership. The garage (Gurd's Garage of Tisbury) was owned at the time by the brother of a school-friend of my mother's, and I had been working there during school holidays. The R4 had been sold to a local girl who had taken it to university.
Through a sequence of events involving a silver propelling pencil that my mother had lost down one of the infamous vent flaps below the windscreen and had been found by the new owner, I was able to ask the father of the girl that bought the Redcurrant whether, if it was ever going to be sold on, I could have first refusal. He said yes, and there we left it.
Then, 3 years later, I got THE phonecall! The girl had gone abroad and no longer needed a car, especially one which by then was getting old and rusty. Would I like to take it away in return for a donation to her charity?
Oh yes.
So the Redcurrant was back. I drove her for about 18 months, and loved it. However time moved on, and the RC was squirrelled away in a barn. In the meantime I acquired another R4, "Delphine", which I intended to use as an organ donor, this was also locked away in the barn. I also acquired a wife and two daughters, a new job and a mortgage; leaving no time for my french ladies.
The barn was quite delapidated, and I felt I ought to rescue the two Renaults before the roof collapsed on top of them. So during the furlough last summer I cleared a path to the barn, Indiana Jones style, and set about the rescue. The Redcurrant had broken down before she was laid up, one piston had blown at the edge and I had no time, and even less money, to fix her. But Delphine had been driven in... would she drive out again?
After a week of freeing seized parts, she ran. The water pump was knackered, the belts were knackered, the brakes wouldnt budge but the handbrake worked, and the release bearing was stuck solid. But apart from that, fine! I decided that she was too good to break for spares.
So she made the short journey to my house, the first time she had seen daylight for twenty years.
I hope to be bringing the Redcurrant out very soon, not under her own steam though.
I have found this website an invaluable source of information, thankyou to everyone.
Best wishes from Wiltshire!

My mother and me with the Redcurrant, circa 1988. Renaults were popular around us then! A 14 and a 12 I think. 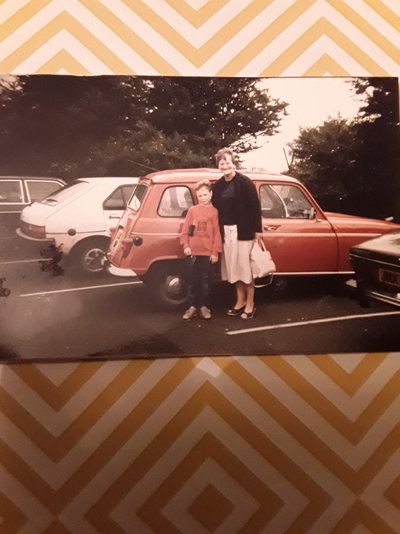 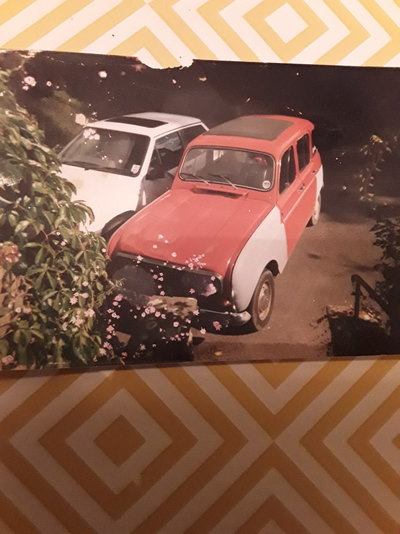 Opening that shed was akin the opening of Tutankamun's Tomb! Brilliant!

That car deserve to be back on the road and for you to drive it.

You are at good place to find anything you need about R4.

What a marvellous story. I know that part of the country well, and the roads are ideal for Renault 4 driving: the old A30, the road to Hindon and all the other roads in the Wylie Valley. Good luck with the two old girls; I'm on my 6th Renault 4 and i wouldn't be without one!
You must log in or register to reply here.
Share:
Twitter Reddit Pinterest Tumblr WhatsApp Email Share Link
Forum software by XenForo® © 2010-2020 XenForo Ltd.
Top