I'm Still owner of many R4, with my girlfriend we have 4: three GTL and one F4, but these last years I stopped working on them, I bought others cars for my collection: Peugeot 304, Citroën DS and the last one: a Citroën SM. Since I tasted the hydraulic suspension on the DS I knew some day I would have a SM, hydraulic suspension + V6 Maserati... waouh !

I bought it about one year ago: Even I knew the engine is not blocked, it didn't work at this time, I'm definitively completly mad !!!
R4 Power

I love the Citroen SM, but it must be the highest maintenance classic car it is possible to own with the complicated suspension and engine. Do they rust much?

Do post some pictures so we can see how you are getting along.

Very challenging car - I haven't worked on an SM yet but did some repairs on a DS once and was fascinated by how complicated but technically advanced it was, down to the smallest detail. Keep us informed!

I bought a model built in may 1972, it has still the three carburettors, I didn't want an injection model, really too difficult for me !

The car was parked in my garage since may, and since the beginning of december 2015 I started to dismantle the front of the car. I finally decided not to try to make the engine running, afraid of breaking parts like valves or timing chain. I don't know what maintenance has been done on the car, so I choose to be prudent.

I took about 530 photos since the beginning of disassembly, these sort of Citroëns are made with a lot of bolts, spacers, nuts, screws... it's terribly complicated for every part I want to remove. Almost all the hydraulic hoses have been removed, it's a real labyrinth and actually I don't really if I will be able to fit them back in the car and make the system run properly...

The car is in very good condition, there is only light rust at some little places, but nothing serious, and fortunatly no rust holes anywhere. I've been heard the SM were better than the DS concerning rust, and looking at mine, it's true

I want to remove all the hoses to have access to the front "unit" (= subframe) and side rails, then I will sand, protect and paint them with the genuine color: AC092 for the unit, and AC318 for the body.
R4 Power

You find your self entertainment.
Difficult one.

SM is one of icons of oldtimer cars.

inform us about progress from time to time.....would like to see how this is going to end.

Found this and thought of this thread. You can do it Snoopy
2 wheels, 4 wheels, what do you mean free wheel?
Renault 4 GTL - Yamaha FZS600 Fazer - Golf TDi

just few photos to show you the kind of job I have on a car like the SM...

Here is the unit just after removing the engine, a real pleasure to have to clean such a thing: 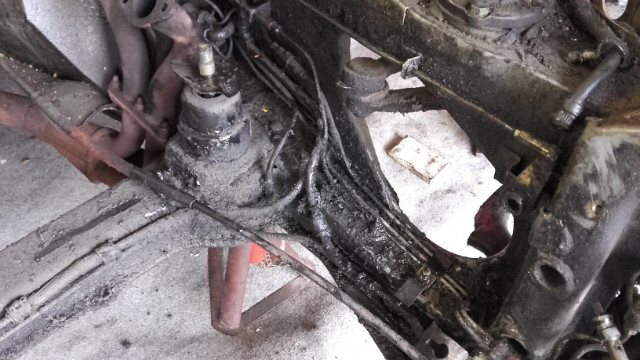 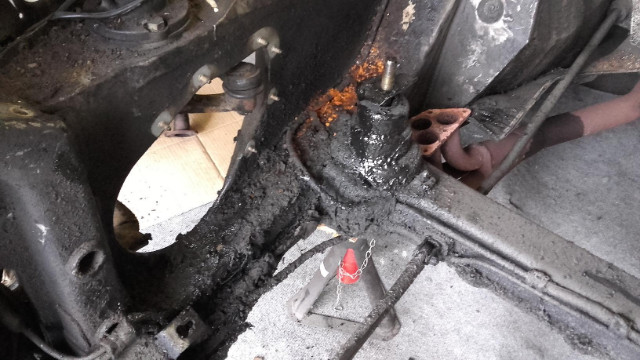 The hydraulic system on a 70's Citroën it looks like that: 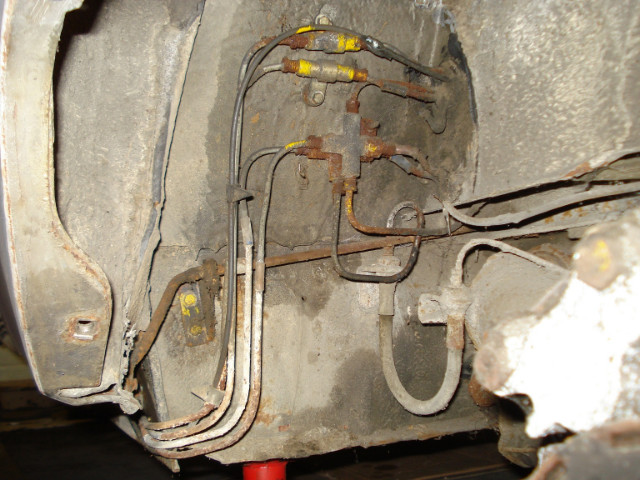 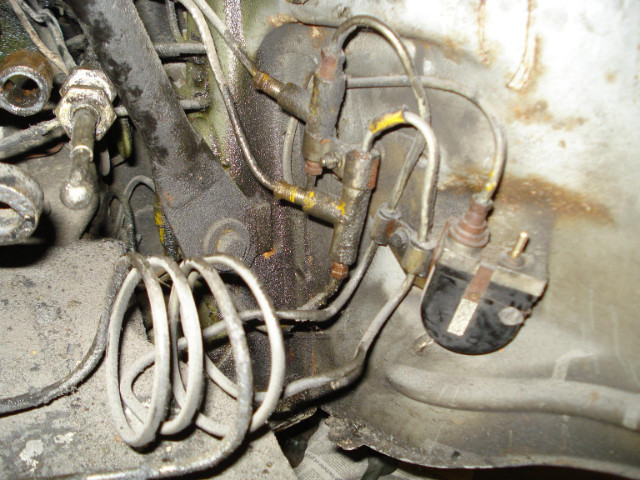 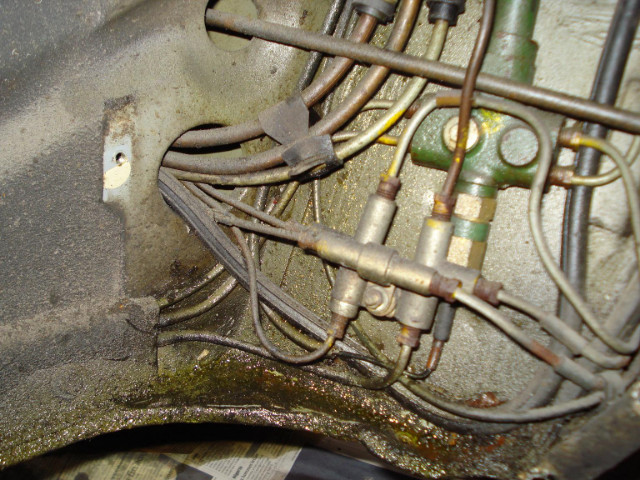 Rack, pinion, and all the hydraulic hoses: 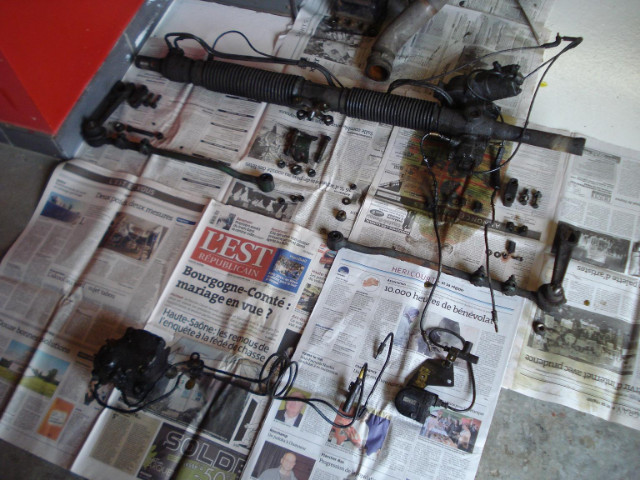 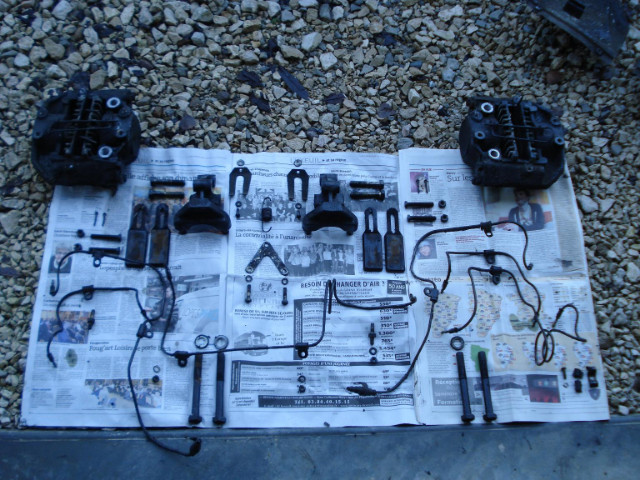 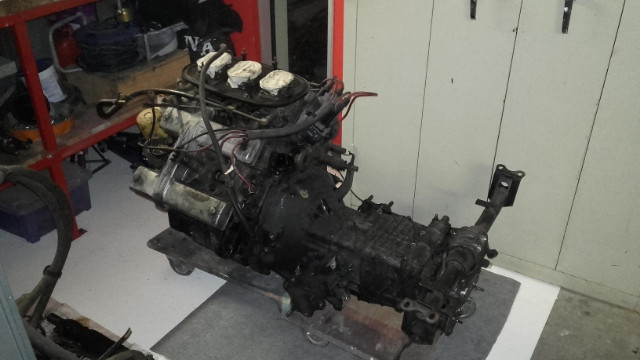 Hats off to you Snoopy. It's a beautiful car Elegant lines with an inelegant beast under the bonnet no doubt. I wish you all the best and will follow your thread. For me just looking at the work involved is exhausting!

I got confused just by looking at all those pipelines....

Hi, last week I applied a primer on the front of the car and the side rails, seeing the car in a clear color like that is motivating, but now I have to do the same on the rear underneath of the car... Hi Snoops! you certainly seem to have your work cut out for you on this one-but it looks to be worth it.
No rust is amazing... -Reid. All of the underneath has been painted, with AC 092 "Gris brumaire", and AC 318 "Sable métallisé", my own paintjob is finished, the exterior of the body will be painted by a profesional.
R4 Power

Hi, over 2 years ago the car isn't still finished, this kind of restoration is hard and sometimes discouraging. I think I will drive the car during 2019 spring if I haven't bad surprise before the end.

Here are 3 videos since the beginning until the last weeks, do not hesitate to post a comment

EPIC!!! you are a true genius for taking on such a huge project!

I was just thinking about you few days back and your plastic front wheel arches.
And then wondering what happened to this project.

I am really happy that is still alive (project)
Keep up and post more pictures.
To me it is really interesting job you are doing.

IMPRESSIVE!!! That's a massive restoration, a joy for the eye to see the car is coming back in it's full glory.
Very well done so far

and keep it up.
Regards, Joop

Holy wow! And that sound of the engine, it makes me shiver.

when you restore a Citroën SM you learn what " long term job" means, almost 4 years after buying it, the car got out the garage under its own power I'm happy even it's not finished, I have to adjust many things...
R4 Power

Man what a job.