Lately, in the Tappets post there was something going on about valve clearances. I posted over there but removed it and started here a new R4 discussion thread.

Normally for all engines we use 0,15mm inlet and 0,20mm outlet but something was nagging me in my old memory regarding 1108cc Cleon engines.
So I took my old first edition 1980 service book (not the first edition Haynes in 1985) and saw some differences according to 688 engine camshafts timing and valve clearances.
I noticed that for 688 712 (GTL) engines produced after may 1979 the camshaft is changed and the theoretical valve clearances should be 0,20mm inlet and 0,20mm outlet.
Enclosed some pictures and I wonder if there's the same information in the UK/France in pre-Haynes service books.
Any thoughts about the different 688 712 GTL camshafts and valve clearances appreciated. 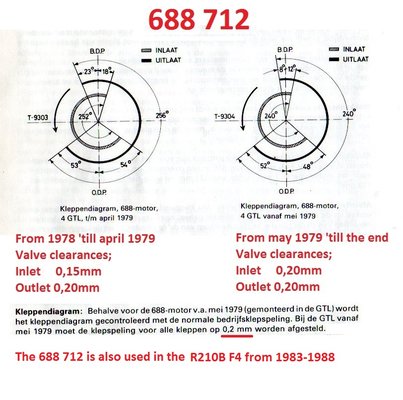 All other workshop manuals, including Renault official books, state 0,15mm IN - 0,20mm EX as the correct valve clearance. Could these figures be the theoretical clearances for camshaft timing measurement?

I have checked Yugoslavian manuals and could not find any info about valve clearance on later 688 engine.
There is noticed difference between 688-711 and 688-712 engine but for both engines manual says 0,15mm inlet and 0,20mm outlet valve clearance
You must log in or register to reply here.
Share: Twitter Google+ Reddit Pinterest Tumblr WhatsApp Email Link
Forum software by XenForo™ © 2010-2018 XenForo Ltd.
Top