For my Vagabond camper I do think that a 1108cc engine is a bit underpowered for the high roof of the vagabond.
I don't want to end up standing still with a stiff headwind.

I have found a Renault 12 engine with 1389cc and decided to convert it to fit a Renault 4.

The Renault 12 has an engine that is facing in the wrong direction
All the auxiliaries are up against the firewall if you want to put it in a Renault 4.

It is either, take a chunk out of the firewall or convert the engine.

Today I started with dismantling the engine. 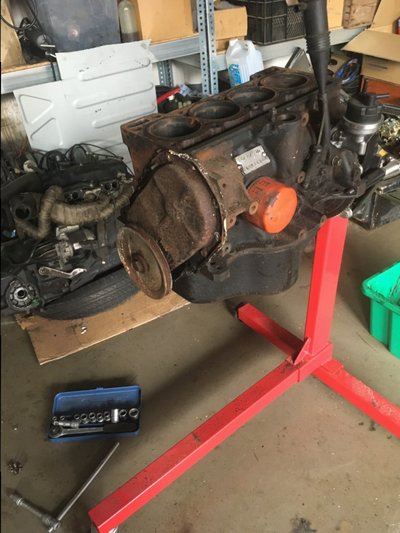 As you can see there is a pulley that needs to go. 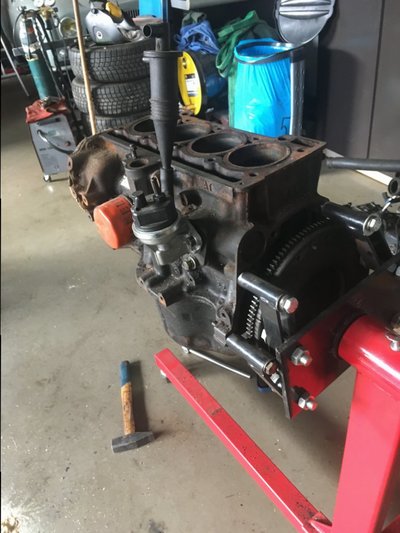 And the camshaft is not sticking out of the front of the engine. 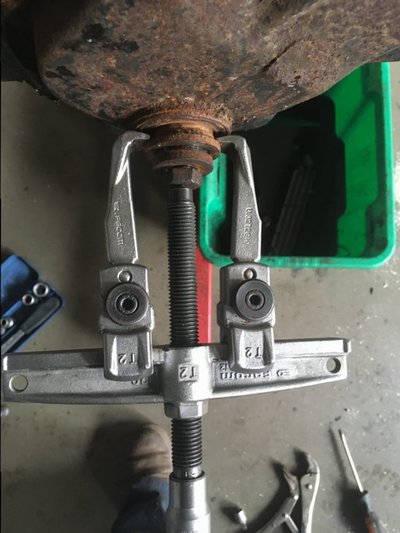 After taking of the pulley I needed to take of a bushing with a straight puller. 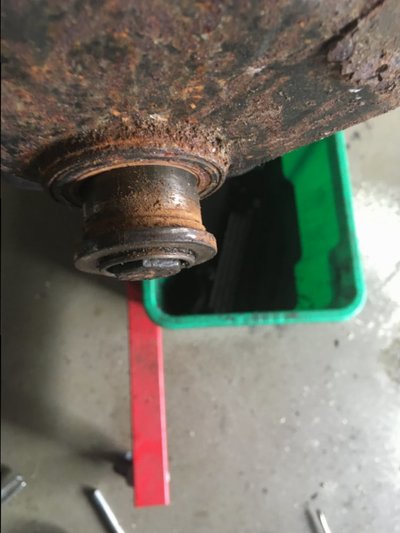 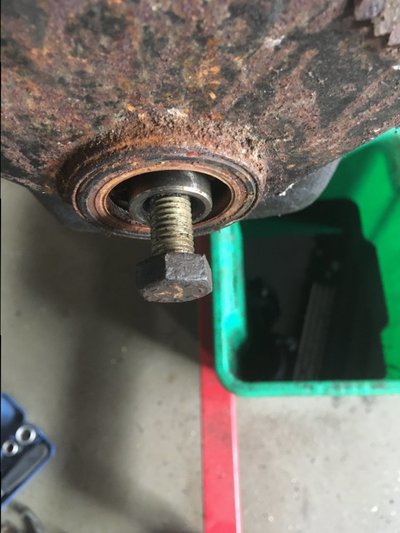 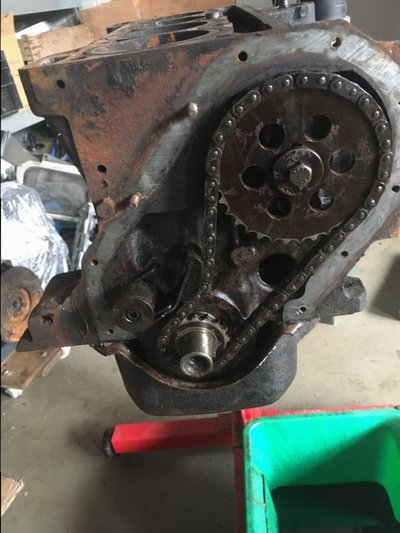 Only then I could take of the timing cover. 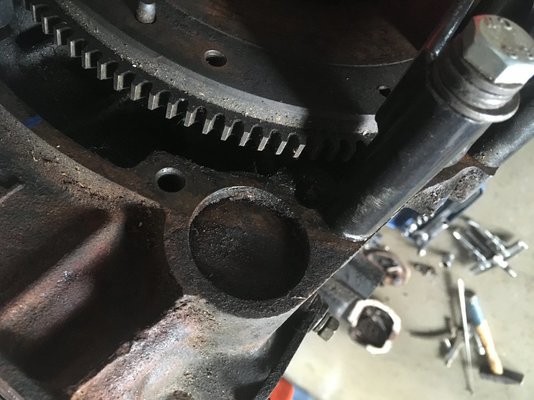 The hole that the camshaft sticks out from is blocked of. 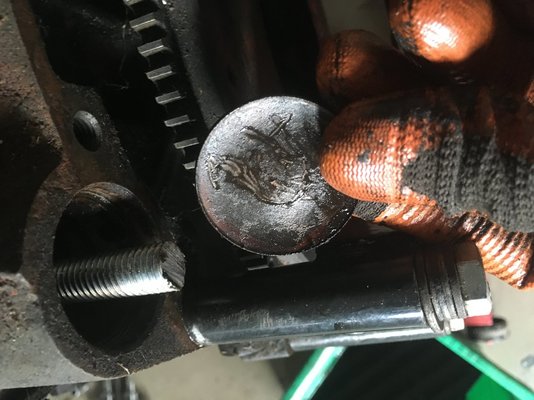 It is easy to knock out with a long piece of thread bar. But you need to take the camshaft out first. 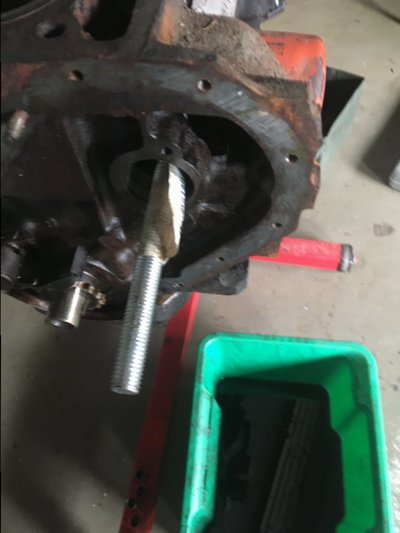 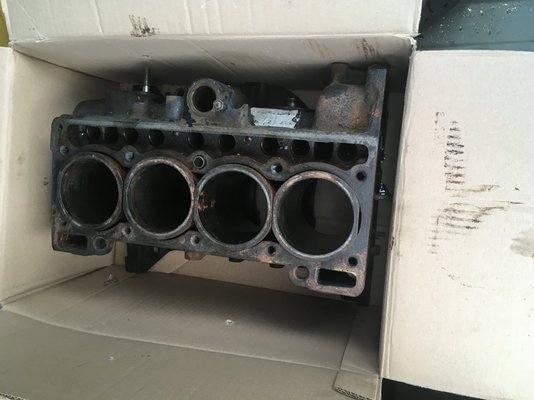 And after two hours of undoing the sump, oil pump pistons and crankshaft you end up with the engine block and liners ready to go to the machineshop to be cleaned and the liners to be honed.
Last edited: Sep 30, 2019

Robert
Good luck with your 'project'.

Keep us all posted with your progress.

Are you going to fit an R4 / R5 camshaft, or make an extension for the existing one?
The cylinder head is different, too, it's not simply a matter of swapping the water pump and blanking plate.

It won’t be a fast engine. But it will have way more torque.

Will you be keeping the original F6 gearbox with higher diff ratio or fitting lower from saloon?
If you think adventure is dangerous, try routine it is lethal..

This conversion is really interesting!
Will the original head cover the increased bore without problems?

Yes it will.
Only thing is that you have increased pressure and a higher chance for pinking.

harbourseal said:
Yes it will.
Only thing is that you have increased pressure and a higher chance for pinking.
Click to expand...

I'm really curious about this work you're doing.
Do you think the same philosophy could be adapted to the Twingo engine?

Yes it works for a twingo engine to.
But you have to take a chunk out of the engine, I am told.
And only on an engine that is from before June 1996.

The engine is back from the machineshop.
Cleaned up and the liners have been honed. 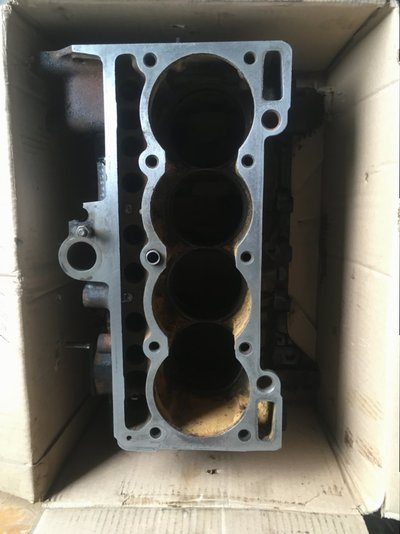 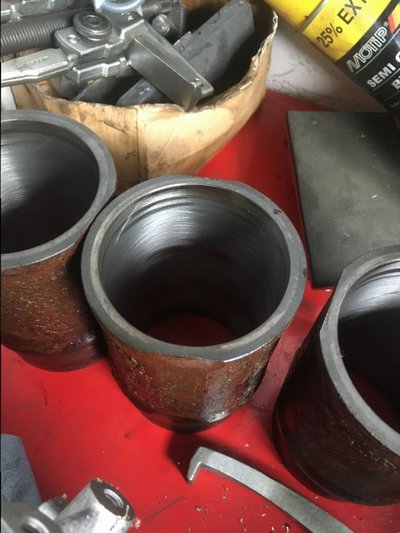 As to some questions.
The F6 cilinderhead fits nicely onto the engineblock.

I made a picture of the head as it is. 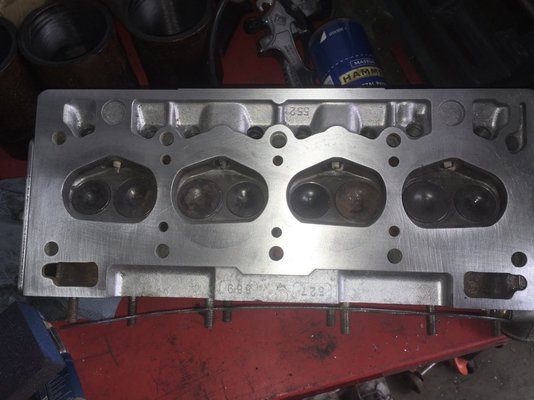 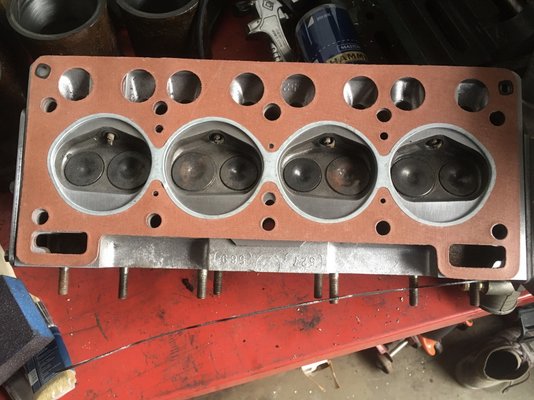 There is only a slight difference.

Maybe you can do the math for me.
I have no clue where to start.

This conversion has been done before in the Netherlands. And it seems to work well. 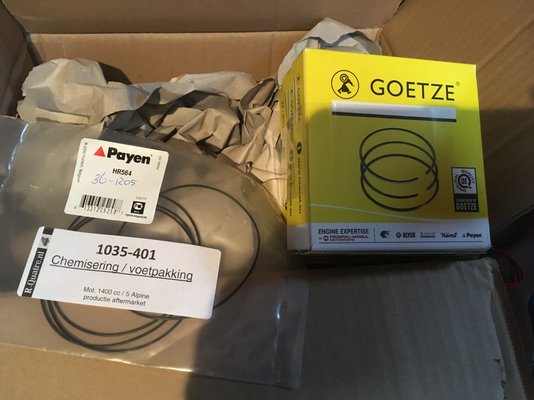 Started with the rebuild today.
First I cleaned the engineblock.
And painted it blue. The philosophy is that on a blue engine you can see any fluid spillage easily on blue.

Then I took the camshaft out of the 1108 engine. 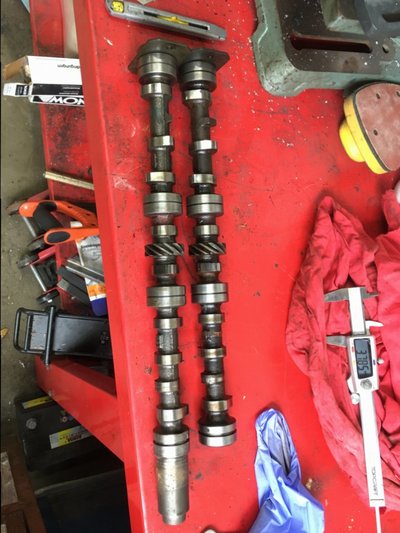 Next to the R12 camshaft you can see the difference.
The last camshaft bearing on the flywheel side is about 3mm narrower on the R4 camshaft.

You need to take the camshaft bearing seat out of the 1108cc engine in order support the camshaft like it is supposed to.

I used the R12 camshaft to knock out the bearing seat. 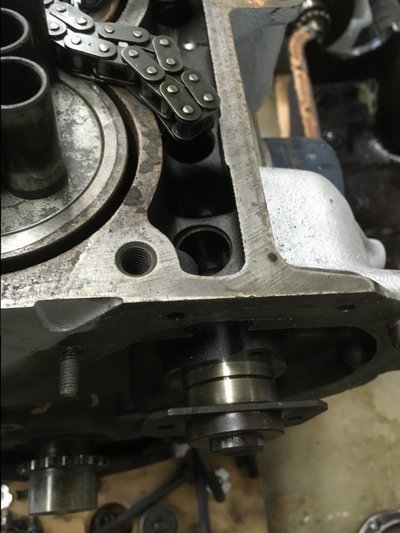 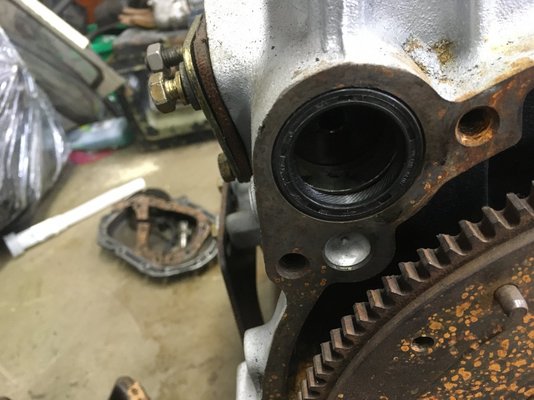 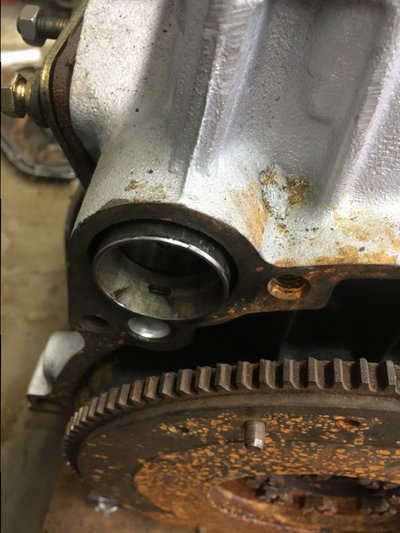 With the bearing seat out you can see the lubrication holes. 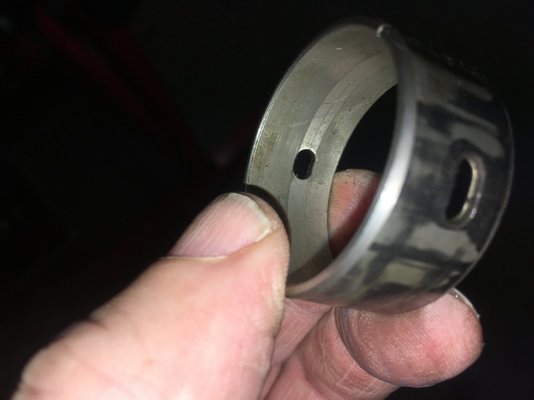 The holes need to line up with the holes in the engineblock.

This picture shows the gap between the engineblock end the camshaft without the bearing seat. 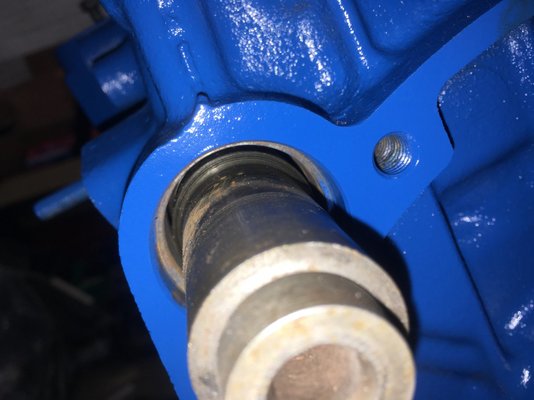 After the paint had dried I put in the liners and pistons. 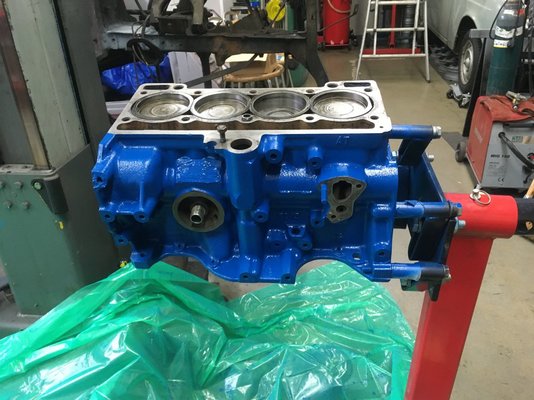 Finishing touch is fitting the head.

So what to do.

Dismantling the 956cc engine was the job for today.

After an hour of taking of the auxiliaries, head and timer cover I could take out the camshaft.

And some careful measurements on the cam told me that the R5 camshaft has 32mm cams.

So I put the R5 camshaft into the R12 engine. And I scavenged some more parts from the R5 engine to complete this one.

The timer cover was a better choice.

I also replaced the spring loaded timing chain tensioner for new hydraulic one.

For that I had take out the blanking plug to free the oil channel and a little pin had to go as well.

New used bearing seat in place with all the oiling holes lined up. 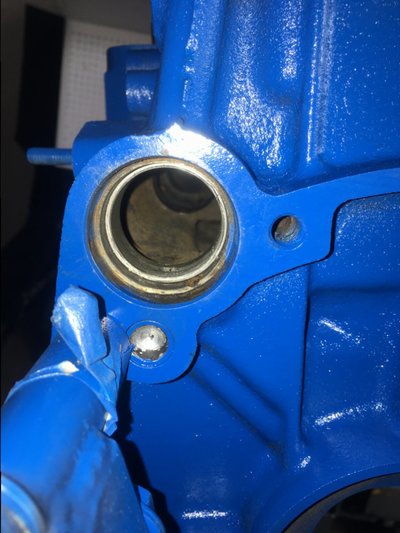 Camshaft with a new seal. 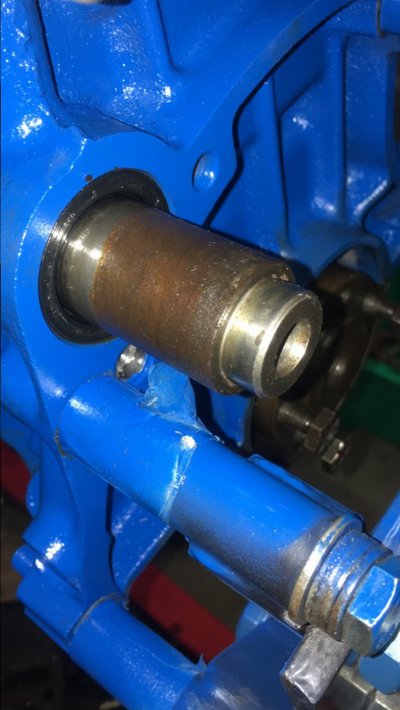 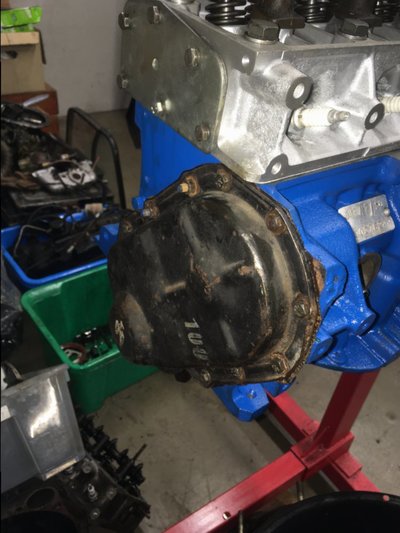 Engine is a bit more an engine.
With the fuel pump on. 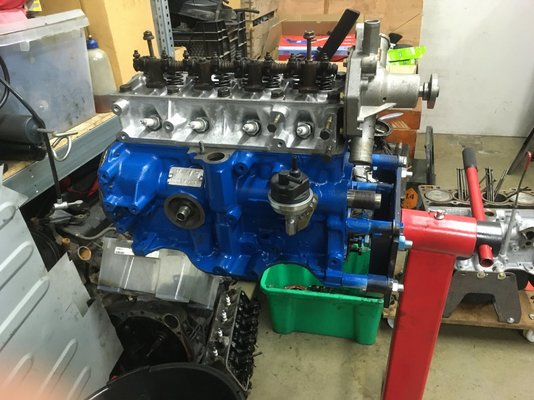 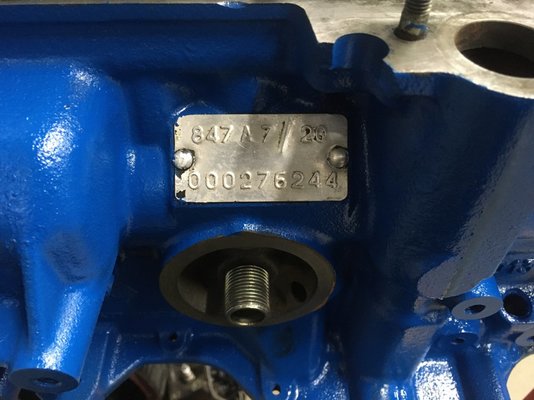 Thank you for your comment @mr-reno-139.
This engine was sold to me as a R12 engine. So I am assuming that it is one. I’ll look up the numbers again to be sure.

It did not come with the head so modifying the head was not in question.

Maybe you can shed a light on a marking on the block itself.
Just on the rim underneath the head it says AT I’ll make a picture later today.
You must log in or register to reply here.
Share:
Twitter Reddit Pinterest Tumblr WhatsApp Email Share Link
Forum software by XenForo® © 2010-2020 XenForo Ltd.
Top