Cover art on the 1970s Renault 4 owner's handbooks must be some of the most wonderful automotive art ever created. The handbooks were re-printed each year with a different cover. I have 11 of the 'edition anglaise' handbook covers and need another 10 or so. If anyone has a handbook not pictured here could you scan the front cover and e-mail it to Contact

My dating system has gone to pot. Turns out the date on the back of the handbooks is the print date rather than the model year date which is a year later. Model years were released in September of the previous year.

The Renault 4 is launched to great acclaim (and a little sniggering).

This manual also covers the Renault 3 which was introduced in 1961. The Renault 3 was a Renault 4 without the luxury features of rear side windows, interior door panels, a rear load mat, or hubcaps. 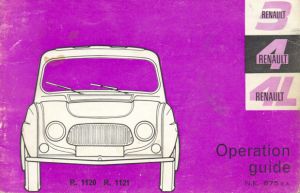 The Renault 3 (R1121) was discontinued in 1962 amidst cries of "the Renault 4 is quite basic enough thank you very much". 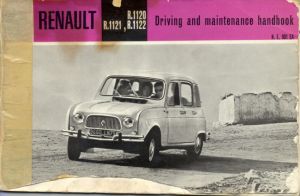 Renault advertised a 24 hour recovery service in the handbook for a fixed price of 24 Francs, but this was only available to Renault 4 owners driving in Paris. Accessories included a roof rack and snow chains, but these were only available in France. 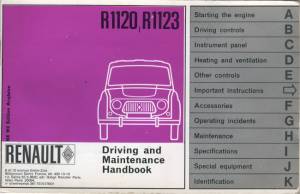 In 1968 the Renault 4 cost around £325. Reliability was questionable in those days with Motoring Which magazine reporting that 74% of the cars in their survey had been off the road for repairs for an average of 4.5 days a year. 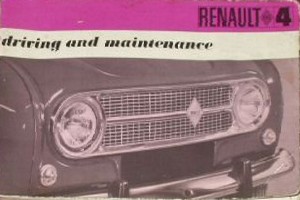 The 1969 handbook looks impressively modern - it wouldn't be surprising to find an image like this as a Flash presentation on renault.com. The date has worn off the rear cover so I can't confirm this is a 1969 handbook, although it came with a car with registration number TTR 438H which must have been sold between August 1969 and July 1970.

The service record for this car is interesting. The owner decided to fit Spax adjustable shock absorbers to the rear of the car in 1977. They were set to setting 6 and then 6000 miles later they were adjusted back to setting 4. The Renault 4 rear dampers work in the opposite direction to other cars, and if the Spax dampers weren't especially designed for the Renault 4 they would have caused the rear to skip around over bumps and oversteer. Perhaps this is why the service record stops in 1978. 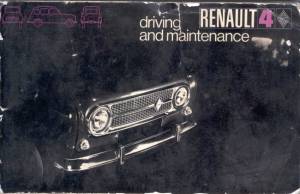 Reliability had improved by 1972 with only 36% of cars off the road for 4.5 days, but the price had gone up to £650 for the basic version. Anybody wanting this very basic motoring would be told there was a 1 year wait and be forced to spend an extra £80 for the Luxe. 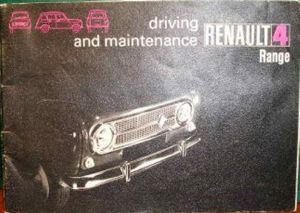 The Magic Roundabout handbook from June 1973 is my favorite. Surely there can never have been a more wonderful owner's manual cover for any other car at any other time.

On Page 53 Renault attempt to sell 'pieces d'origine' but these only included replacement parts, so presumably you had to go elsewhere for your 8 track player.

Reliability had been further improved with 25% of cars off the road for an average of only 1.5 days. A Renault 4 now cost £725. 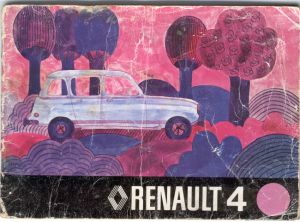 This was the manual from Florence the psychedelic Renault 4. The official Renault photographer had clearly just bought some new coloured lights and star filters and put them to good effect in the cover photograph. The rear cover has a larger view of the rear of the Renault 4.

The Renault 4 saloon was now available as an L or TL. The top of the range TL is pictured on the cover. The TL was readily available but you had to go to some effort to buy the L outside France.

The 'pieces d'origine' clearly hadn't been selling too well. Presumably Renault concluded this was because the Anglaise didn't understand what they were. By 1976 Renault had changed them to 'Renault Parts'. 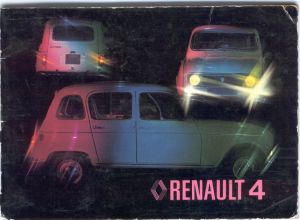 The car pictured on the front cover of the 1978 handbook isn't a Renault 4, although the line of the rear pillar and open door cunningly form the figure 4. Having said that the 1978 Renault 5 manual uses the same image in a different colour.

In the event of windscreen breakage Renault state "we have approved a specially designed emergency inflatable windscreen which will allow you to continue your journey in complete safety and comfort". Were they being serious or was this a writer's joke missed by the editor? 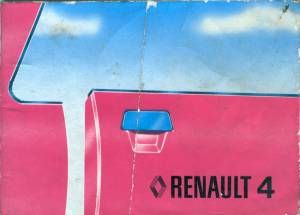 By 1979 the team responsible for the earlier manuals must have run out of hallucinogenic drugs.

Renault offered servicing and paintwork repairs in the manual. French language made a come back with the 'boutique' where you could buy one of those new fangled cassette radios. 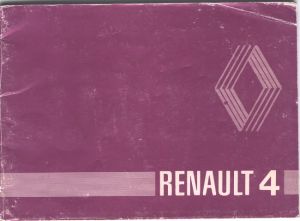 The Renault design team put all of their effort into the chrome effect font on this cover, and in 80s fashion printed the cover in a very tasteless pink. The Renault logo has been moved from the front cover to the rear cover.

For the first time Renault accepted the possibility of operating incidents and dedicated 3 pages to describing how they could be remedied. The first possible incident is that the starter doesn't work, and Renault helpfully suggests that the battery might have become disconnected! 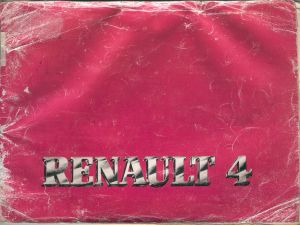 You can find lots more Renault 4 brochures and art on www.allez-y.info/

Where to buy cars and parts