Hi all,
9 months ago I started a new project.
The basis for this car is a French Airforce 1992 GTL Sinpar.

The car came from France and was in a horrible state after spending some years in a field in the French country side. With a beaten in roof and a seized engine it was sold as scrap.

Originally bought to salvage the Sinpar running gear, the remains of the body and chassis were discarded as scrap until I found them.
And made it my own project.

Since most of the floor and sidebeams were completely eaten away by rust, I separated the chassis and body.

I found the forward and aft subframe more or less intact.
Probably because they are strengthened for the 4x4 running gear.

Having no papers on this car was no problem, we have plenty scrappers standing around and I selected a 1984 TL with no engine as a donor to get this car back on the road.

Since this summer I have stripped down the TL, found two 845cc engines with gearboxes and stripped those.

The body of the Sinpar was in an almost perfect rustfree state, except for the roof and a hole where the left back seatbelt was attached.
A good basis for restoration.

In Octobor I took my trusted angle grinder to the chassis and welded in 2 new sidebeams and a new old stock floor.
The chassis is almost finished as I write this.

You can also view the progress on. https://www.facebook.com/Renault4armeedleair 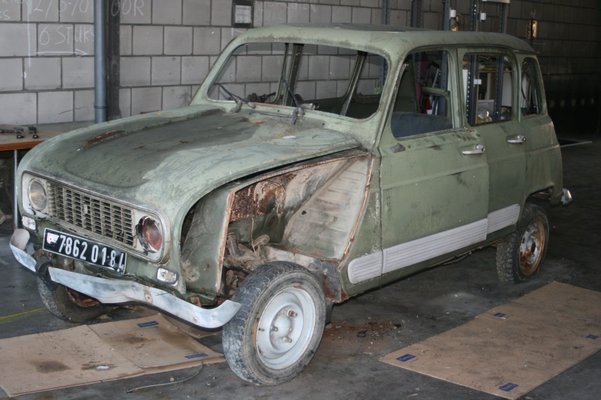 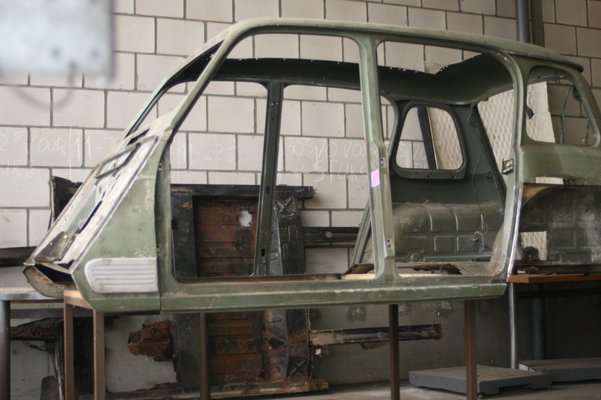 In the background the chassis. The caved in roof I have taken out and will be replaced with a Twingo cabrioroof. 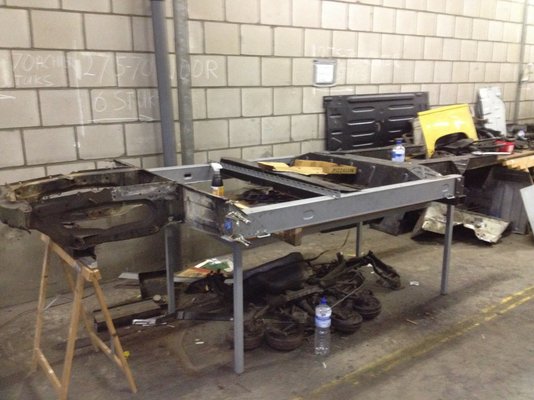 Replacing the sidebeams In the backgrond the new old stock floor. 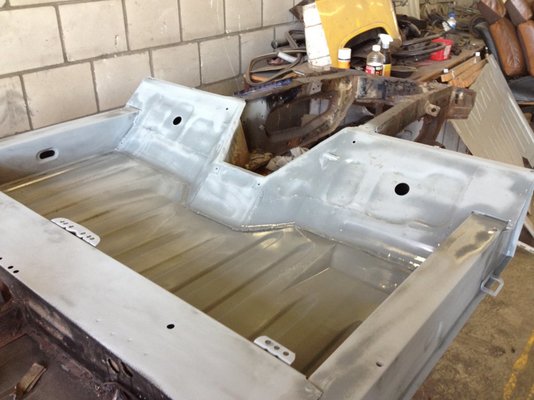 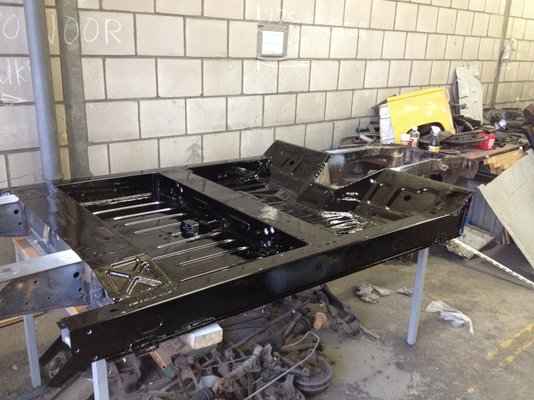 First layer of boat bottom coat on both the footwells.
Notice the Fourgounette aft subframe that was used for the Sinpar GTL
Last edited: Nov 26, 2014

Rescued from a field....that's a very lucky car! Will be following your progress with great interest 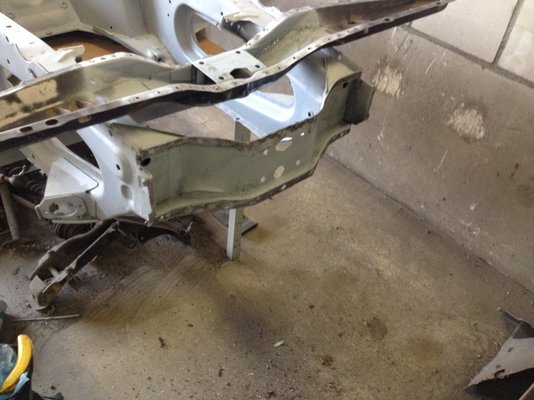 Before welding the moustache in place I coated the inside with zinc coating. 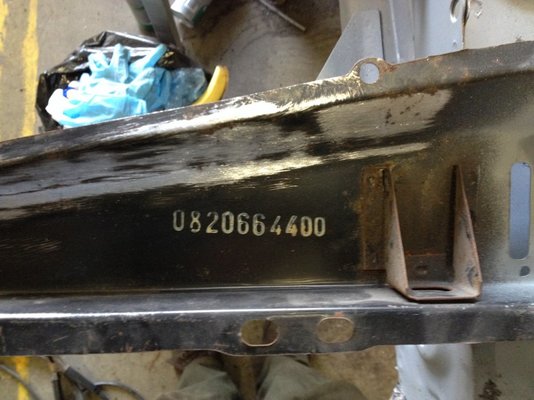 The Renault stock number was still there 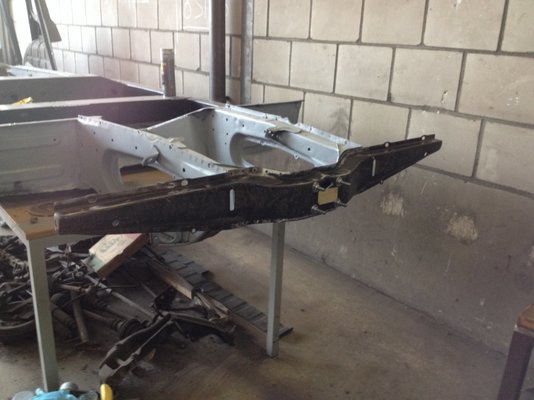 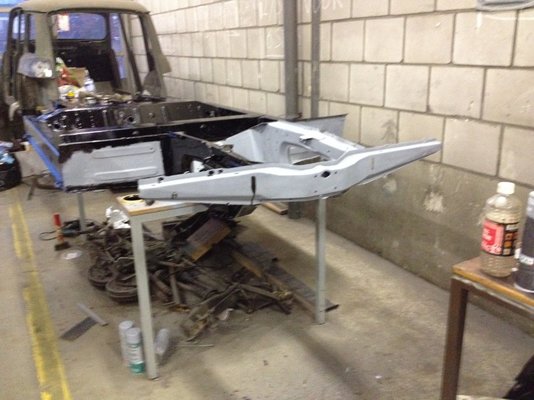 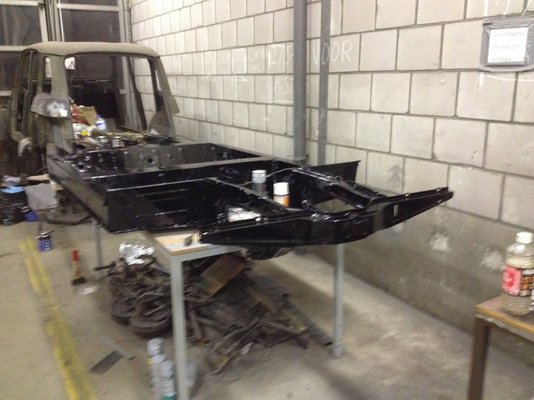 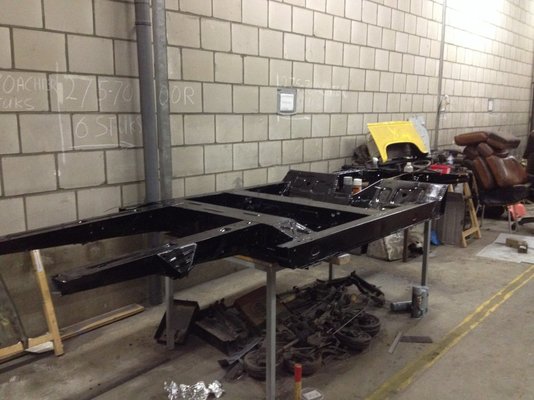 Since its to cold to do any serious work that involves paint or primer.
I started to clean some motor parts and I made a motor and gearbox protection plate. 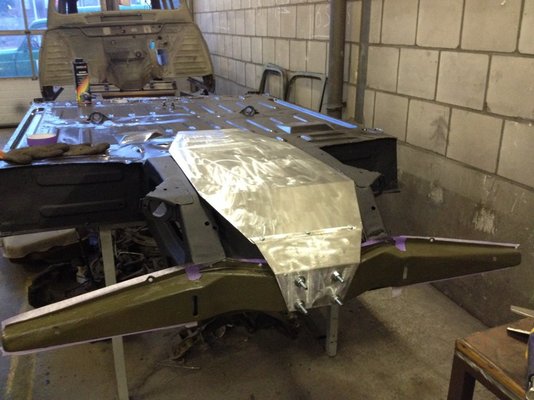 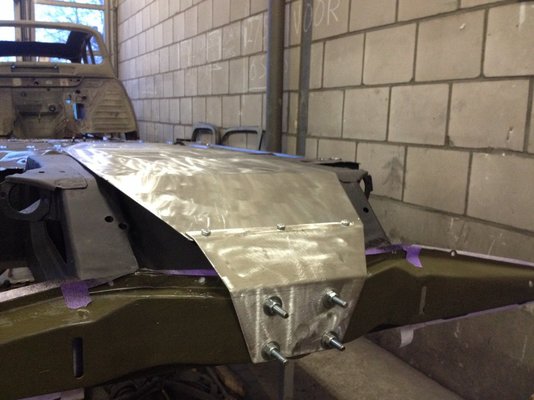 Looks good, i was thinking about doing that for my F6, don't forget the hole so you can drain the oil ?

Bobble said:
Looks good, don't forget the hole so you can drain the oil ?
Click to expand...

Thank you Bobble. I want it as smooth as possible. So I won't get any rocks or sticks in my oil sump.
I wil have to undo the plate when I need the oil to be changed.
Maybe in the future I'll make that hole after getting fed up with undoing the lot.

that's ok, as you will only need to take it off a couple of times a year for that. 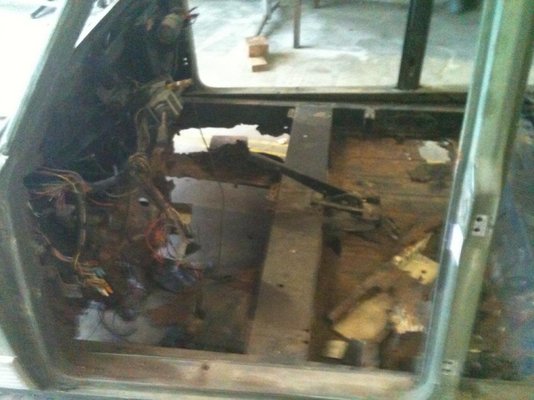 Found this picture in de catacombs of my computer.
I think it says enough about the deplorable state of the chassis.

thats very depressing! I'm sure that you're happy that the chassis welding is complete and your new floor panels are in

mojobaby said:
thats very depressing! I'm sure that you're happy that the chassis welding is complete and your new floor panels are in
Click to expand...

You could say that. Tomorrow Brings another day of work on the project more photo's to come

Today was a day of more welding ,cleaning up and doing modifications.

I made a bend strut from a piece of household radiator pipe.
Bend it into shape according to another TL hood. And welded it in place.
The strut that was there was a straight one and that will not fit a modern R4. 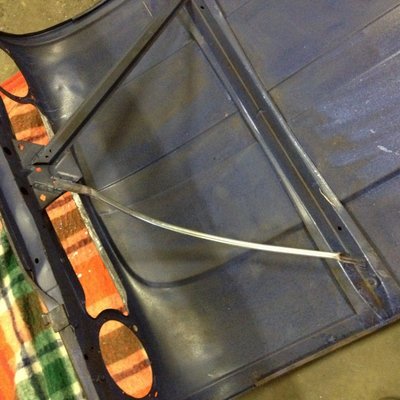 After that I treated the inside of the hood with Tanik. that's why the hood has this purplish color. Tomorrow I will be able to put primer on.

My super stonecatcher from a few days ago got two more folds to make it follow the front subframe a bit more. And to make space for the front stabilizer bar.
I also treated them to a coat of Tanik. So it won't rust anymore. 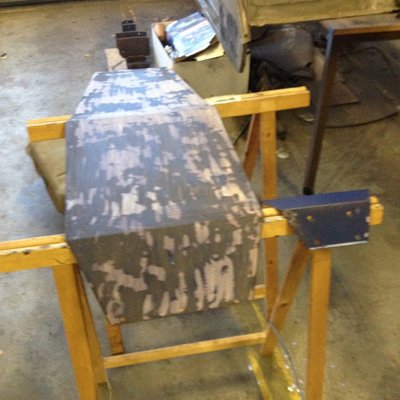 It looks somewhat camouflaged now. But it wil get a flat black coating

And I worked on the lefthand inner wing. It needed some more welding.
I cleaned it up and gave it a coat of Tanik. 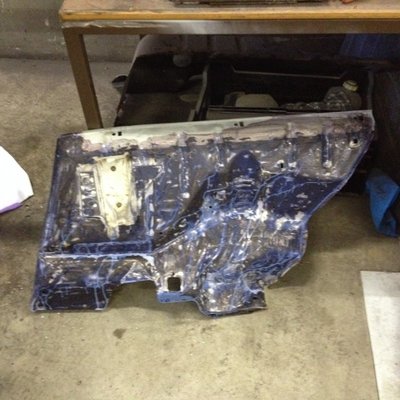 Today I picked up my new wheels and tyres at my local tyre shop. They found some old stock mud and snow tyres tucked away in a forgotten corner of their warehouse.
They will look really hefty under my project. 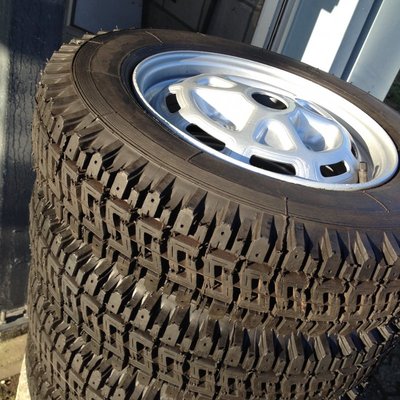 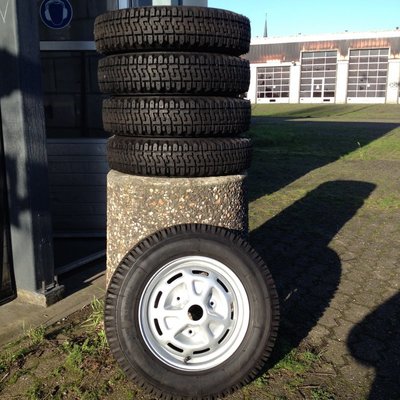 I also found some time to prime the inside of my hood. 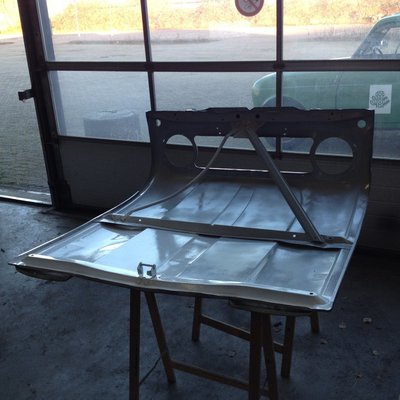 And I put some caster wheels under the body so I can work on it and put it out of the way when I'm not there.
Last edited: Jan 17, 2015

good idea that's what i did with mine makes if so much easier to move, nice wheels and tyres

Those are serious tyres harbourseal, what a find.

I've been bugging you about the tyre on top of Marigold That's what got me started with the search for some terrain like profile tyres.
So I've found what Ive been looking looking for.

Today I did some more work, on the front suspension parts
Cleaned the parts with a steel brush grinder and spray painted them black. 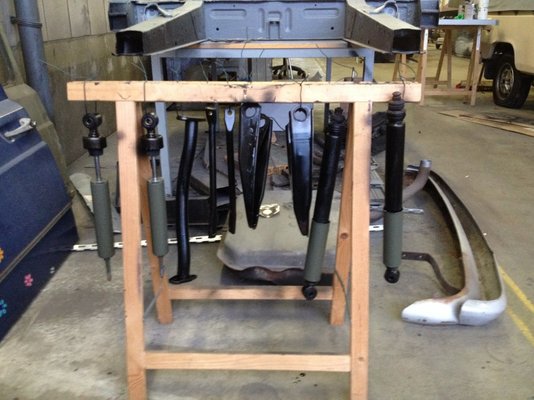 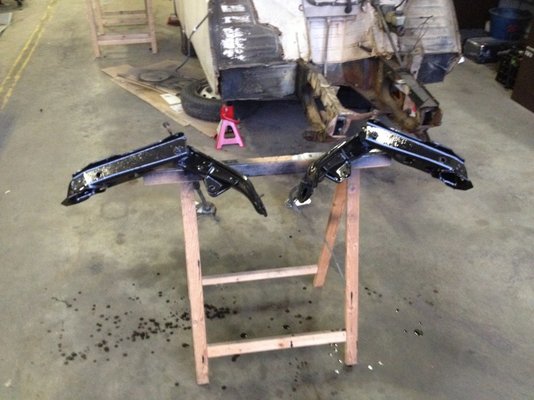 Today wasn't very productive for my project. Had to run all around town to get my stonechip for the bottom and subframes. But that is finished now.
And I cleaned up the front and aft bumpers and spray painted them flat black and put a second layer on yesterdays parts 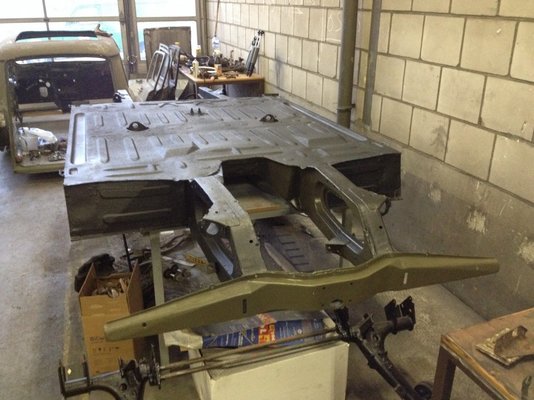 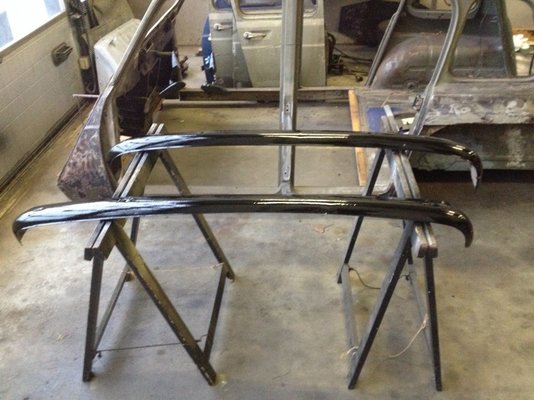