Do know from the original advertising blurb for the (very easy to use) insulation that have used in my van, brand Low-E it was originally apparently designed for NASA, one of the alternate uses it had been advertised as used for was heat shielding for NASCAR exhaust/turbos, cockpit heat protection, might be worth a look, might not. The thermal efficiently is up in the high 90’s % from memory, its also fire retardant.
If you think adventure is dangerous, try routine it is lethal..

In the last week I made some progress on the vagabond.
Installed the heater unit and connected all the piping for the cooling system.
filled up the system and bled it as far as possible with a closed thermostat.
Oiled up the engine and let the starter turn the engine round. So far so good.
withe a squirt of petrol straight into the carburetor Gasmonkey style she wanted to fire. But lacking petrol from the tank she wasn’t quite ready.
I also made a cradle for a toolbox under the bonnet next to the expansion tank. 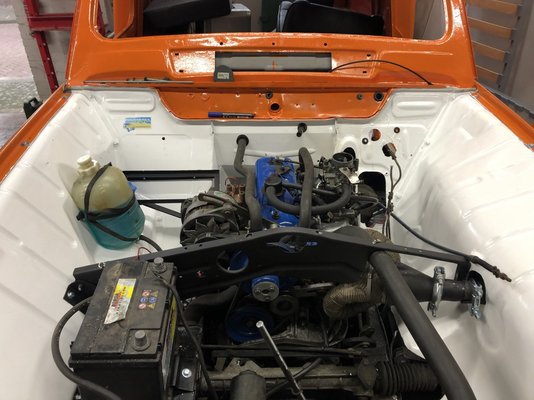 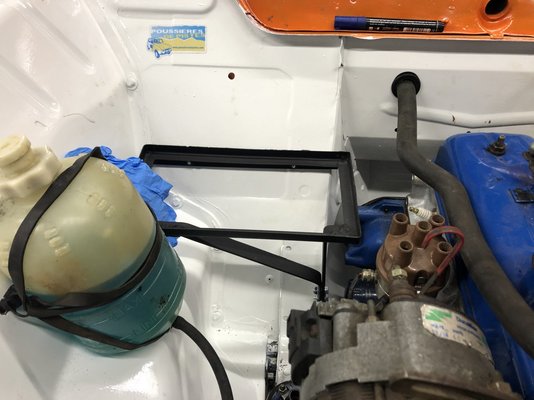 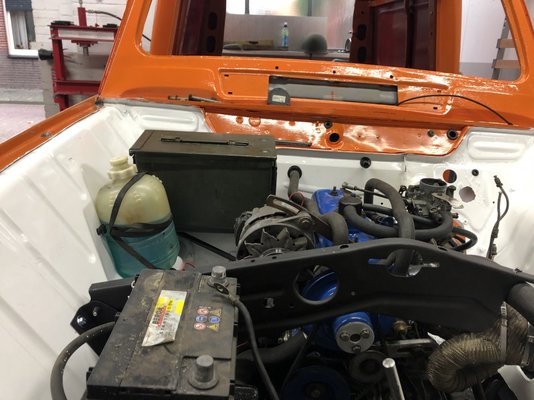 Love the toolbox in the bonnet!
As usual, fantastic job

What kind of tools will be inside?

What will you do about rattling of tools inside toolbox?

petak said:
What kind of tools will be inside?

What will you do about rattling of tools inside toolbox?
Click to expand...

I have a canvas toolroll for all my spanners.
So no rattle.
And a small hydraulic jack. And some tidbits like some snares and ignition stuff.
Last edited: Oct 19, 2020

If I get road rage there is always the 50cal machine gun under the high roof.

I hate rattle. It drive me crazy.

harbourseal said:
If I get road rage there is always the 50cal machine gun under the high roof.
Click to expand...

Ohhhh yeah, the good old faithful Browning M2HB, be sure to add some reinforcement

And a little progress.
I managed to close the holes in the sides with polyester epoxy and glass math.
just some bondo work and painting the roof.
I picked up the bumpers from powder coating. Put the front bumper on again. 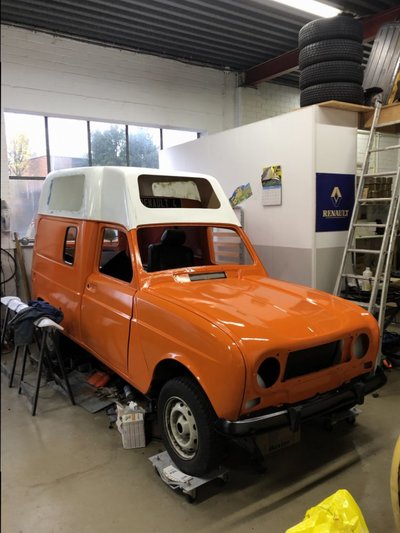 Some more progress today.
back window is in. Side window done.
Both bumpers done and the bonnet latch is on.

This stagnant project is not making any progress. Due to duty’s in hospital I’m at a complete standstill at the moment.
But I found some time today to do something cosmetic.
I modified the grill to a mix of modern and retro. There were some slats missing. So I cut almost everything out except for some of the vertical ones. And put a modern honeycomb grill covering over the vertical slats that remained.
I had a wrecked phase 2 grill cover in a corner somewhere and used the losange to make this grill a bit more retro. 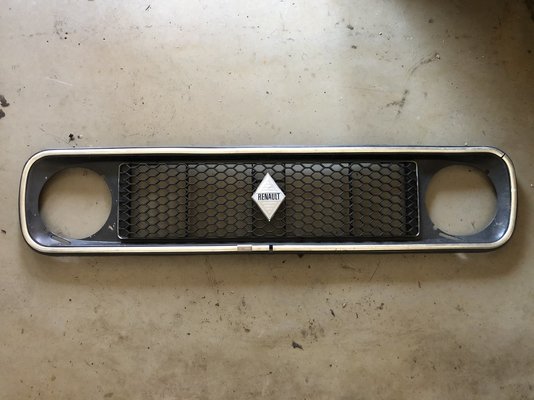 I had a 950cc Renault 4 TL in that exact same color scheme.

It had originally been white when it was bought as part of a large fleet by Exxon in Paris. I would guess it was a 1985ish car.

Exxon painted the outside orange, however the door shuts and engine bay/ boot floor were still white.

It was driven to the UK some time in the 90's when the rear wheel fell off! It had pressed steel rear suspension arms, one had rusted out and snapped.

It was abandoned in my town, where it became the property of a farmer who sold it a few years on.

I picked it up on fleabay for £200, 20 years ago and luckily had and cast axle so I could replace the failed one easily. It was still on French plates at that time.

I tool the body off the frame, removed the orange and painted it back white, then reassembled it. Reapplying for the V5 was a real saga, however I obtained UK plates.

After that it was a really nice low mileage car with no rust that I sold on. Wish I had kept it.
Serial car restorer, on my 12th Renault 4, qualified mechanic just like the Queen

That grill is looking really nice. Surprisingly good joind old and new, retro and modern.
I like it.