I decided to remove the body to carry out a proper repair to the chassis. It would be possible to achieve an MOT pass by just welding patches over the affected areas (and this is the usual approach as my repair is not cost effective for a £50 car). This would not cure the problem but would keep the car running for another couple of years.

This photograph shows the completed chassis. The shiny parts are the new metal that I have welded in which might help visitors work out which areas of the chassis are represented in the photographs below.

The rear suspension mountings on Ermintrude were much more corroded than any other Renault 4 I have seen. We welded a temporary repair onto the chassis when we collected the car as the LHS mounting had become almost completely detached. 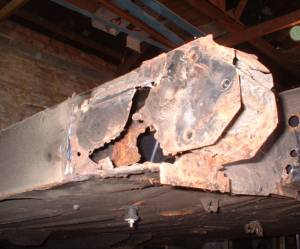 The rust was relatively localised. This photograph shows the LHS rear corner of the chassis with all rusty metal removed. Each side of the chassis member was cut back to a different point and angled. This is to reduce the chance of stress build up causing fatigue along the welding line. 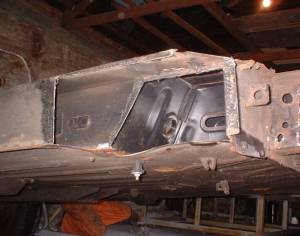 The answer was to use a jig. This jig was made using a combination of measurements made from Ermintrude, Rosalie the Renault 4, and dimensions from the Renault 4 factory workshop manual.

The jig mounts onto all of the suspension mounting points which allows each mounting to be removed for repair (one at a time).

Make your own jig - see the page on suspension jig dimensions. 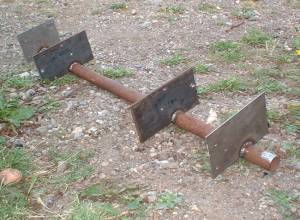 The new inner face of the chassis member was made from a single sheet of steel which was bolted to the jig and welded in to the chassis. I neglected to take any photographs of the inner face. 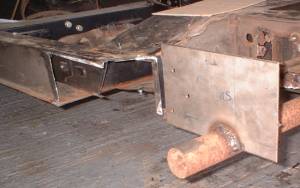 The inner face and strengthener were welded in. The inner face was made from 1.2mm steel (the same thickness as the chassis rails), and the stiffener is 2mm steel. It was difficult to judge the original thickness of the stiffener as this had almost completely rusted away. I think Renault used about 1.6mm thick steel.

This photograph is from the right hand suspension mount (I forgot to take a photograph while I was repairing the left side. 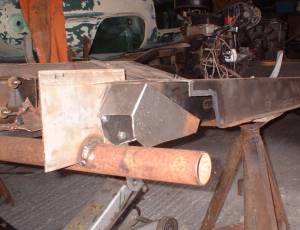 The original reinforcement was rotten and had to be remade. The reinforcement consisted of two U shaped pieces of metal. The outer piece is triangular in shape and spreads the suspension loads into the chassis. The inner reinforcement is much smaller and braces the two forward bolt holes. 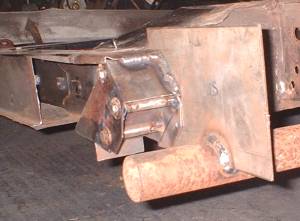 A small amount of welding will be carried out inside the reinforcement before the floor is replaced to complete the repair. 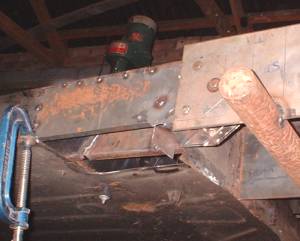 The new suspension mounting with the jig removed. I have welded up all of the exterior seams to prevent water ingress and rust. I've also left out the holes that were present in the old mount for the same reason. The old mounting had a flap at the top to locate brake and fuel pipes. I've removed this to prevent it from acting as a resting place for mud.

A trial fit of the rear suspension revealed that the suspension mountings were accurately positioned, and that I hadn't trimmed enough material from the bottom of this mounting. I'll rectify this when I carry out the floorpan welding. 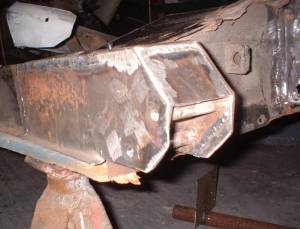 The inner suspension mounting was also in a poor condition and the outer and bottom faces were replaced with 2mm steel. I used a thick single sheet of steel instead of the original double skin as it's the double skin that caused the rust problem in the first place.

See Clementine's Renault 4 Rear Suspension Repair for more details of that repair (on another car... and carried out by a cat). 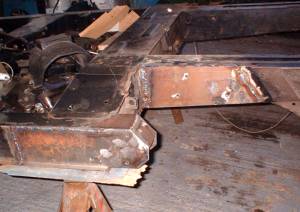 The double skinned section at the front of the chassis can be seen bubbling away on most Renault 4s but is rarely a cause for MOT failure.

The double skinned section doesn't appear to be a reinforcement - it was just a handy way for Renault to fill in the little triangular section at the top of the chassis. The rust didn't extend above the level of the chassis member. 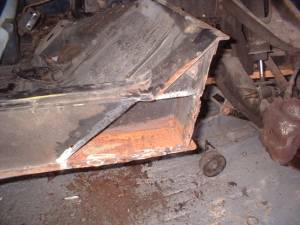 I welded in a single section of 1.2mm steel. Fortunately the floor pan and wheel housing were in good condition on this car. Often the rust spreads into these areas making the job a little more effort. 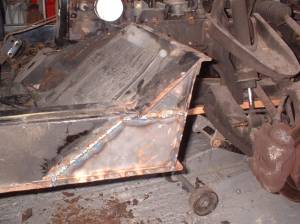 In common with most Renault 4s Ermintrude had rusted in the floor area inboard of where each chassis rail joins on. I had to repair 3 of the 4 corners. I cut the rusty metal away from the floor and the chassis, then welded a new piece of metal in and plug welded it to the chassis for strength.

With the floor repairs completed the chassis was painted, and the rear suspension refitted. Time for the body to go back on for more welding. 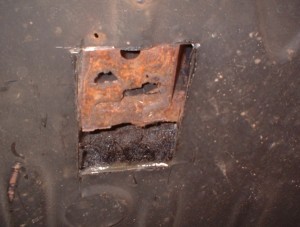