Hi, I'm Clementine the cat. I don't know much about repairing Renault 4 rear chassis rot but thought I'd give it a go. I've made an informative diary of the repairs.

Drive Rosalie into barn and put her on axle stands so she can't run away. Remove various bits that look like they might get in the way. Put them in pile at end of garage in case they come in useful later on. 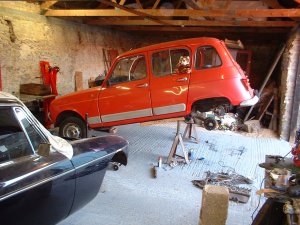 Randomly undo a few more bolts. Remove fuel tank. Fuel tank full so get covered in petrol. Worried about fire starting with sparks from enthusiastic use of spanner so stop for a cigarette while I dry out. 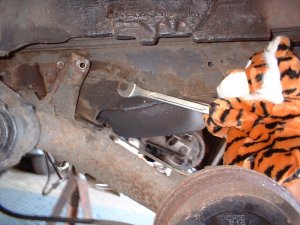 Unbolt the rear suspension which then falls on my head. Start to hallucinate about rust rampantly spreading throughout the chassis......

Sam: "Al, where am I? What is it I'm supposed to do here? Why is everything made of polystyrene"

Al: "Sam, you've leaped into the body of a starship captain. Ziggy is working on it. I'll let you know what to do when it's almost too late." 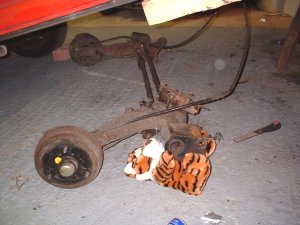 Oh dear. It wasn't an hallucination it really is quite rusty. Make mental note to remember the name of the garage that gave Rosalie an MOT 4 weeks ago and take all cars there. 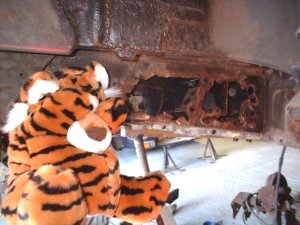 Make myself feel better by attacking car with angle grinder. I'm sure Bridget Jones never had this problem. 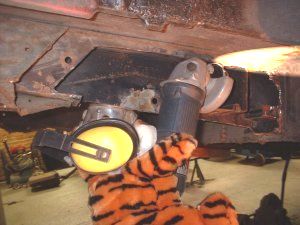 Weld in the replacement sections. Luckily garage had not done waxoyling they charged previous owner for, so almost complete absence of fire. Normally have flames shooting out the back. 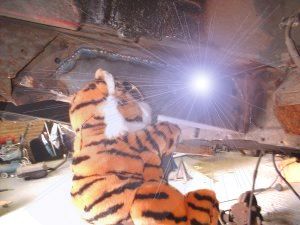 Mind drifts to scene from Renault design office, Paris circa 1961..... 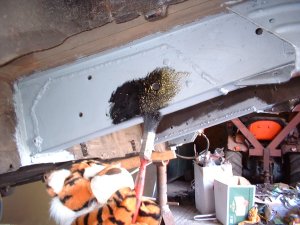 Design engineer with Scotts accent: "Monseur Captain Dreyfus, we're only a year away from launch and the rear suspension still isn't fiddly enough to fit! We're gonna have to fit a rear brake proportioning valve."

Captain Dreyfus: "OK Monseur Scotty, just make sure it's on the side of the car with the least space."

Al: "Sam, Ziggy says you have to have an ultimately unrewarding love affair with a surprisingly human looking alien who incidentally turns out to have ulterior motives." 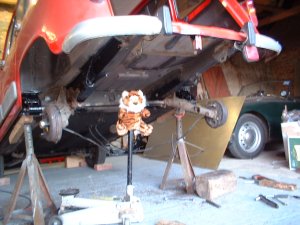 Refit brake pipes but find hole in fuel pipe so needs to be replaced. Also remember have to renew little pipe to brake pressure proportioning valve.

Refit dampers then fiddle with suspect gearchange for a while without success. Remove radio with plan of selling to recover substantial part of Rosalie purchase price. 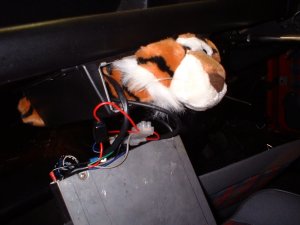 Fit new fuel pipe and everything goes back together apart from new little pipe to brake proportioning valve which turns out to have the wrong connectors.

Notice that one rear wheel now 2 inches further forward than other. Put this down as design feature happy that rear suspension repair is complete. 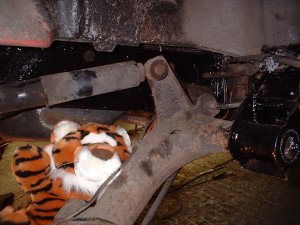 Rear tyres become horribly worn on outside edges. Use patent track measuring device to determine that rear wheels are not pointing anyway near front of car. 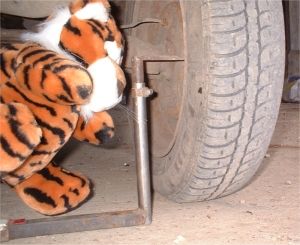 Sam: "The Renault rear suspension repair is clearly completed - why haven't I leapt into another dimension?" 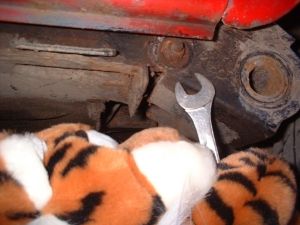 I've written a sensible version of this page just in case anyone is actually interested in how the repair is done. Next installment - the front chassis/ floor corner repair. I'll leave this until next year in case I feel inspired to completely repaint Rosalie at the same time. Also it's only the passenger side so I don't need to worry about falling through the floor.

Later still - Rosalie leaned a little to the right after the repair. The suspension came off again and the chassis checked aganst Clementine's new jig. The holes were found to be only 1mm out of allignment but this was enough. Holes re-drilled and welded and the repair is complete.