Ermintrude the Renault 4 was making funny noises when she drove over bumps. It sounded exactly like squeaky springs in the seats, but the noise was coming from the front of the car. Frederick the Frog diagnosed a faulty front suspension lower ball joint and bought a new one on eBay.

Frederick supported the weight of the front of the car using a jack under the lower suspension arm to get the ball joint into it's normal operating position.

Turns out there was a lot of play in the ball joint. 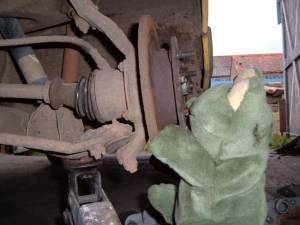 The drive shaft has to be removed before the ball joint could be extracted. There is a big nut in the middle of the hub that is best undone before the car is jacked off the ground.

The front upper ball joint needed to be extracted, the brake caliper removed, and the steering turned to one side before the drive shaft could be pulled far enough out to access the ball joint. 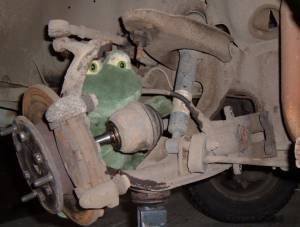 Original ball joints are riveted onto the suspension arm and have to ground off with an angle grinder. This one had previously been replaced, but the nuts had rusted on so it also needed angle grinding. 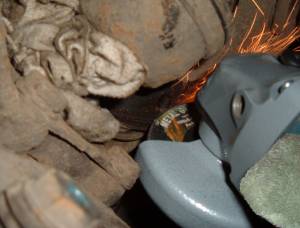 The old ball joint had dried up and the nylon sleeve had cracked. When these things fail they fail very quickly. 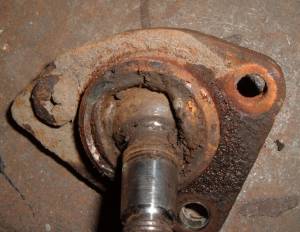 Frederick decided to fit a good ball joint from some spare suspension. While it isn't really a good idea to replace safety critical parts with secondhand bits, Frederick said he knew the history of the spares car so it would be OK.

The new ball joints come with nuts and bolts. The nuts go at the top. 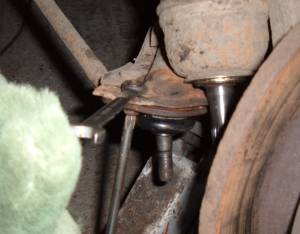 Turns out the history of the spares car involved been mercilessly abused by a mad hippy woman. Never mind, more work is planned soon which will involve removing the suspension once more.

The front balljoint is one of the trickier jobs to do at home. You'll need a ball joint splitter, and probably an angle grinder. And of course the right joint to use as a replacement.