Leave Frederick the Frog for 5 minutes and he'll take something apart. This time it's a starter motor.

Starter motor problems are common on Renault 4s. The symptoms are often very similar to a flat battery - the starter motor turns very slowly, just clicks, or does nothing at all. After a few more tries of the key the starter might work normally. 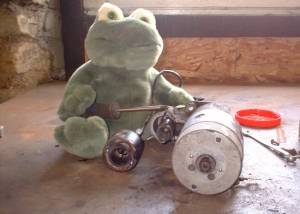 Unfortunately, there is an open path between the starter solenoid and the clutch, so the solenoid gets covered with dust from the clutch, which makes the electrical contacts dirty. 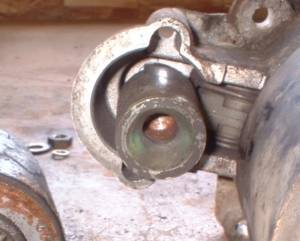 The starter shaft runs on a brass bearing. The bearing on this starter had become a little worn. I unscrewed the two 10mm headed bolts that pass through the starter motor, then pulled the shaft out of the bearing, and filled the bearing with grease. This should increase the life of the starter motor. 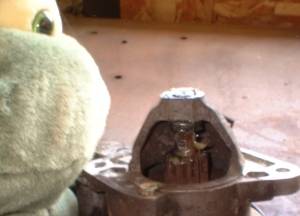 What a difference this work makes. Previously the engine would turn slowly on the starter, occasionally needing a few tries of the key to make it turn at all. I changed the starter motor for the one I'd cleaned up. Now the engine turns like a steam train, and because the starter turns so much faster the car now starts with fewer turns of the engine.