New front and rear dampers (shock absorbers) can transform a Renault 4. But be careful which ones you buy as most don't work! Having wasted a lot of money on dampers that have failed in a matter of months I've got some views on the subject:

The rear dampers on a Renault 4 are fitted horizontally and work in the opposite direction to ordinary dampers (they compress on bump and expand on rebound). Only dampers specifically sold for the Renault 4 will work as the rebound rate is about twice the compression rate. The original Renault rear dampers were gas pressurised oil filled dampers. The gas keeps the oil under pressure and prevents it from cavitating (air bubbles forming in the oil).

All oil filled dampers will tend to develop air bubbles inside during normal operation, and in most cars these bubbles rise to the top of the damper where they don't do any harm. The Renault 4 rear dampers are fitted horizontally so the bubbles can't bleed out, and the damper ends up with air around it's valves. That stops the dampers from damping and leads to wheel vibration followed by a complete loss in damping.

This problem tends to happen when the dampers get hot and are worked hard. A mile at 50km/h down a farm track was enough to ruin a pair of aftermarket Sachs Boge dampers. The Renault 4 sosft suspension works dampers very hard - they need to be good ones.

The original Renault dampers are the ones to use, but these are no longer supplied by Renault. Angel on the forum has tracked them down:

If you bought replacement dampers from Renault a few years ago you'd have bought gas pressurised dampers. Now they are selling Sachs Boge dampers. The rears will last approximately 1 mile at speed on a bad surface. The fronts last well but become soft. 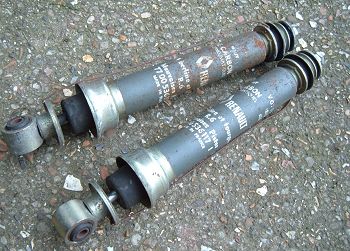 Ideally gas pressurised dampers should be used all round (it's essential for the back and a sign of quality for the front). Here are some options:

Original fitment for some Renault 4s. A softer ride than normal but they last well.

There are two types. Avoid the normal ones as they have an excessively soft ride from new and a tendency to fail after a few months of normal driving (because they are not gas pressurised). Munroe do make gas pressurised dampers and these have good reports - these might be the best alternative to DeCarbon.

Gas pressurised ones have good reports.

Stiffness is quite good when new, but the rears fail very quickly and the fronts become soft quickly. Renault now sell these Sachs Boge dampers (at 3 times the price) when you order from them (Renault no longer supply the correct DeCarbon dampers). Don't buy them.

Be very careful - aftermarket damper manufacturers may not have bought a Renault 4 for tuning so the rates could be badly suited to the car. They certainly won't have done the durability work on the car, so very likely they have the cavitation problem mentioned above.

How to tell if you need new dampers

The dampers will be way past their best by the time they start failing the MOT for oil leakage. The following are good clues:

How Long should dampers last?

I've worked on cars still fitted with original dampers after 20 years and 80,000 miles. The original Renault dampers were built to a good specification. But these cars needed new dampers. I'd be happy with 5 to 10 years life as the installation in the Renault is hard on dampers.