I wouldn't normally write obituaries for my old workshop tools, but this angle grinder had lasted for so long I had grown attached to it.

The angle grinder was a 4 inch Bosch GWS 6-100 and had seen constant heavy use over the last 13 years. I think it did pretty well to keep going for so long and I'll probably buy Frederick another one (although not just yet - it's nice to have some peace and quiet for a while).

Frederick the Frog used to enjoy playing with his angle grinder for hours on end.

It was a Bosch 4 inch grinder and it made a lovely noise.

Today the grinder made a less lovely noise and stopped working. Frederick was very sad. 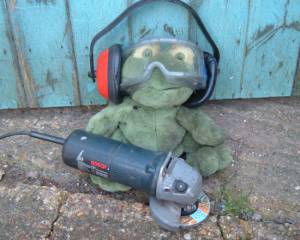 He cheered up a lot when he realised this would be an excellent opportunity to take something apart.

Most of the bearings had a great deal of play, but the one to the base of the motor (far right of the photo) had completely dried up and seized. 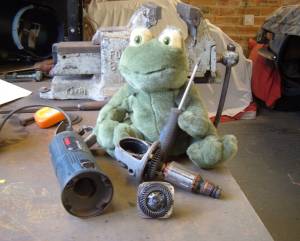 Update: Amazingly the grinder is still available 13 years on with the same model number. I've ordered another for £50 from Axminster Tools. I thought about going for the 4.5 inch model, but I bought a whole load of 4 inch grinding discs on the morning the grinder failed.

It'll be fun to see how long this one lasts compared to the original. The cooling seems to have been improved so maybe even longer. Do bookmark this page and come back in 13 years time for the answer.

New one lasted only 2 years after doing about 1/10 of the work of the old one. It's a struggle to get reliable tools these days, but I had though I could rely on Bosch not to cheapen their professional range so much. Maybe an Hitachi next for me.