Ermintrude's European trip was 'planned' at New Year after a few whiskys with Pat. He needed to return some snowboarding equipment to a shop in Koln.

That's close to Ingolstadt where Dan lives, and it would have been rude not to go skiing in the Alpes once we were there.

I haven't quite figured out why we then went to the southern tip of Spain......

The Nurburgring was on the way between Koln and Ingolstadt. You can turn up and drive around the old circuit in any car for about 10 euros per lap.

We thought it would be amusing to take a Renault 4 around, but the track was closed due to snow, so we spent the day in the museum. 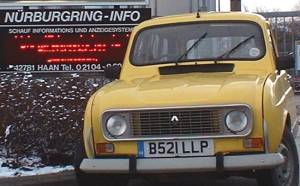 The Nurburgring museum has grown since I last visited. It now fills 4 halls. The photograph shows a detail from a Maseratti 250.

A pleasing number of the exhibits looked like they were still used on the road. An enormous Maybach had evidence of road salt that had not been completely cleaned off.

Only a couple of the halls contain historical cars. Another was devoted to video driving games including a couple made from old Formula Ford cars. One hall has been funded by BMW and is really just a big showroom. 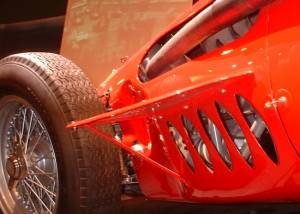 We stayed with Dan and Arianne in Ingolstadt and went snowboarding in a small resort to the south of Munich. 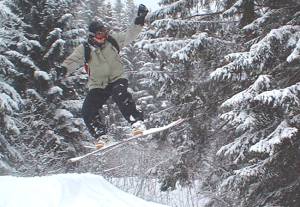 The Audi "museum mobile" in Ingolstadt was closed for a press launch during my visit last year. This year I had a look around.

Many pre-war Auto Union racing cars were damaged during the war or lost to Russia as war reparations, and none of the beautiful Streamliners survived. Audi commissioned a replica for the museum, which was built by British craftsmen from original photographs. 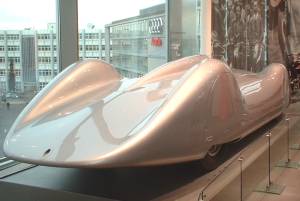 Audi's latest concept car, called the Rosenberg Special after the 1930s racing driver, looks a bit like the batmobile from the rear. From the front it looks like a pig.

The former chairman of the VW-Audi group was a member of the Porsche family and was reluctant to introduce a car that would compete with Porsche. He has now retired so it will be interesting to see whether Audi will productionise a car like this. Or better, something similar but with a rear window, legal tail lamps, wing mirrors, and some clearance for suspension travel. 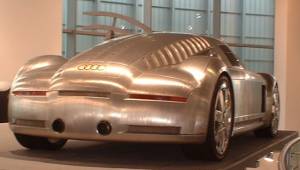 Ermintrude the Renault 4 was fitted with some extreme snow tyres that made her look like a Land Rover. This pass between Germany and Austria included a number of hairpin bends which which the Renault coped admirably without snow chains. 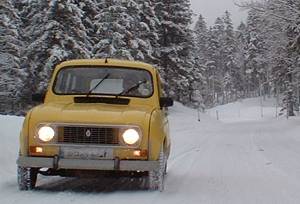 We stopped to see the Neuschwanstein Castle, an enormous castle built by King Ludwig II of Bavaria in the neo-late romanesque style (if the guide book is to be believed).

King Ludwig II acceded to the throne at the age of 18 in 1864. Just 2 years later Bavaria was annexed by the Prussian empire, leaving Ludwig with nothing much to do other than build fairy tale castles.

The powers that be were upset about Ludwig spending all of his money on castles and committed him to a sanatorium. He died just 2 days later of completely natural causes, as did his psychiatrist.... 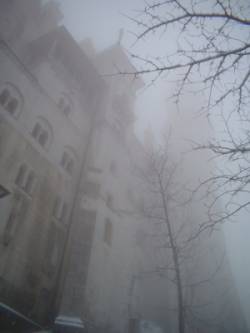 The powder at Stubaital in Austria was amazingly good, and we managed a whole day of snowboarding without once going onto the piste.

Val Gardena (Groden) in the Italian Dolomites was quite the opposite - there were some lovely pistes but the complete absence of off-piste meant that we only saw two other snowboarders throughout the whole day. 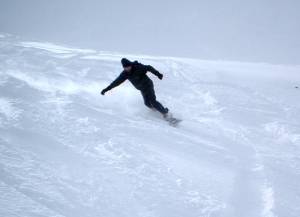 We took the St Bernards pass through the Alpes into Italy. The motorway consists almost entirely of viaducts and tunnels. Driving in Italy was a little hectic, but our little Renault caused delight in an Italian motorway toll booth.

After an overnight stop south of Milan we drove to Monte Carlo. We had only seen a couple of Renault 4s in France, and only one in Germany, so were surprised to see five of them in somewhere as small as Monaco. I think they are regarded as a cool form of transport over there.

We parked (illegally) on the grand prix circuit beside the waterfront and had a look at the big yachts. 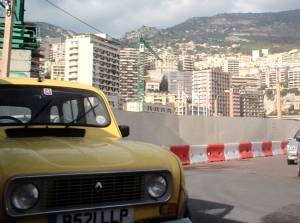 The Monte Carlo Rally was due to start on the following day and the mechanics were busy preparing the cars.

After a brief stop we continued to Barcelona. 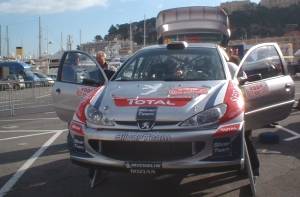 The Temple de la Sagreda Familiale in Barcelona is the most different piece of architecture I have ever come across. The organic shape and decoration give the impression that the building has somehow grown out of the ground rather than been built.

The slender internal columns are built at an angle to take side loads, thus avoiding the need for buttressing. Each side has a different look. The nativity facade to the north (pictured) is built in an imposing gothic style, while the crucifixion facade to the south has a much cleaner look. 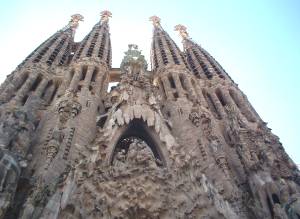 Sagreda Familiale is still under construction. It will have an enormous central tower, two other main towers, and 12 smaller towers (8 of which have been completed) when finished. Construction of the central towers has barely started, but a postcard with a drawing of the completed cathedral assured us that all would be completed by 2021.

Spanish builders have a special word to describe the projected completion date of buildings - 'mañana' roughly translates as tomorrow in the sense that tomorrow never comes. 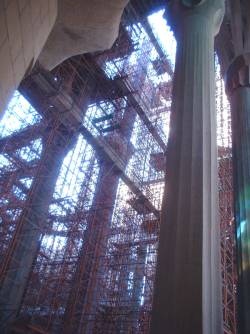 There are a number of Gaudi designed buildings in Barcelona and they are all worth visiting. My favorite after the Sagrada Familiale is the La Pedrera apartment building.

La Pedrada is an apartment building built for Pere Mila and his wife Roser Segimon in one of the most desirable location in Barcelona.

I eavesdropped on an english speaking tour guide who told the story of La Pegreda. The official name of the building is Casa Milla. The derogatory nickname La Pegreda means stone quarry as the locals thought the odd curvaceous frontage looked like it had been carved out of rock.

Gaudi made a special effort on the roof. Each stairwell and chimney is formed into a strange organic shape. 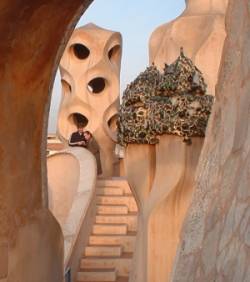 Andy met us in Barcelona and we drove down to his apartment in Altea, just north of Benidorm. I can now understand why so many British people move to Spain as the weather in January is very much like a British summer.

Altea is also popular with Scandinavians who can be distinguished by the ski sticks they use when walking.

From Altea we drove to the Sierra Nevada mountains above Granada in the south of Spain to sample skiing the Spanish way. 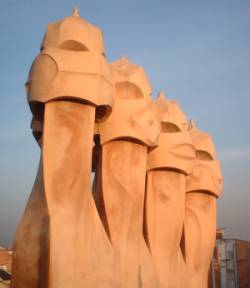 The snow was pretty good on Sierra Nevada considering that no snow had fallen for more than a month. The Spanish are pretty efficient with their snow machines so the piste was actually very good.

Accommodation in the village is expensive, almost twice the price of Alpine resorts, but Granada isn't too far away so most people drive up each day. 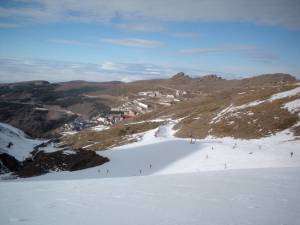 It seems pretty unlikely from the photograph, but Pat just about landed this jump. The photograph was actually taken in Germany. The cloud fell on our second day at Sierra Nevada preventing further photographs.

With the poor visibility I decided to have a go at skiing. To my surprise I found I could do it after some expert tuition from Andy, thus avoiding the normal couple of weeks of going slowly in snowplow turns. 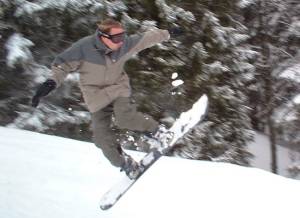 Just down the road from the Sierra Nevada ski resort is the enormous moorish castle of Alhambra. 'Al Hambra' translates as the red city, which gives an idea of the scale of the place. Within the walls are a fortress, some palaces, a village and gardens.

The Nazir palaces within Alhambra are notable for their intricate plasterwork and tiling. The overall style was Moroccan, although stone was used as a construction material rather than mud which must have made the castle impregnable to invaders armed with buckets of water. 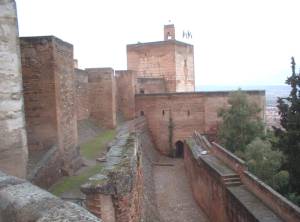 The journey back to the UK from Granada took two long days of driving. Ermintrude the Renault 4 was particularly heavily laden from Calais - we helped to shift the European beer mountain.

The Renault started to idle roughly on the way home, and was running on 3 cylinders during the week after our return. I suspect the continuous high speed running burned one of the valves, although I have yet to inspect the engine - instead we swapped the engine for a spare. 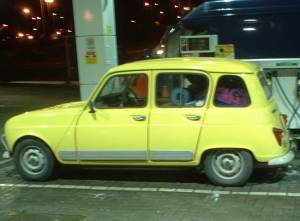