We missed the Velvet Revolution by a year or two so Czechoslovakia had already split into the Czech Republic and Slovakia.

Below from left to right is Ben, Chris and me. 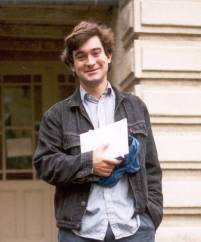 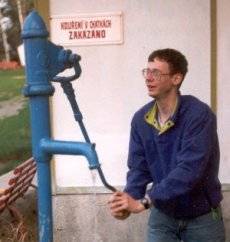 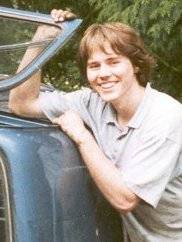 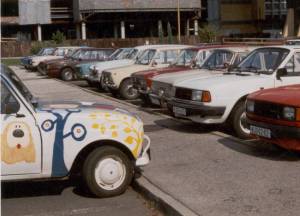 Florence the Renault 4 was fitted with an 850cc engine with an amazing 27bhp, so was perhaps not the most suitable car for a 3000 mile journey, however she was able to cruise at nearly 70mph.

Chris and Ben hadn't seen Florence before the trip and weren't aware of the psychedelic paint scheme until it was too late. 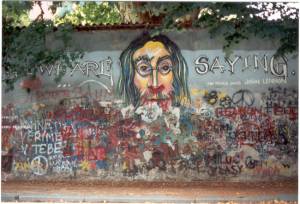 This photograph was taken in 1991. For more information on the wall see http://www.bagism.com/library/lennonwall.html 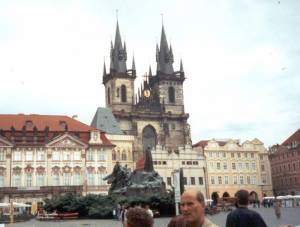 Just two years after the Velvet Revolution, Prague was becoming expensive to visit. We only spent 2 days there before heading off into Moravia.

Throughout Moravia we would find references to Saint John Nepomuk (1729 - 1784). The king found out that his wife was having an affair, and that she had confessed to Nepomuk. Nepomuc refused to reveal the name of the queen's lover, so the king did a number of nasty things to him, including hanging, quartering, cutting out his tongue, and throwing him into the river.

Various parts of Nepomuc were recovered and are now contained in jars throughout Moravia. 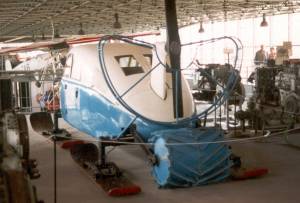 Tatra were one of the most advanced manufacturers in the work in the 1930s, making streamlined cars and trains before anybody else. They developed the concept for the car that became the Volkswagen Beetle, but the idea was stolen by Porsche when Czechoslovakia was annexed by Germany in the second world war.

Tatra's streamlined V8 saloons were very fast, but unfortunately the V8 was positioned in the rear of the car, so the cars could be dangerous when cornering. German officers were banned from driving Tatras during the war as too many were killed in high speed accidents. 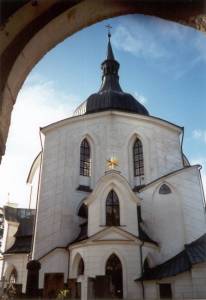 We met up with some French girls touring in a Renault 5 and decided to tour together. We wanted to continue our interest in John Nepomuc and visit the Church of the Tongues (Zelena Hora, near Zdar nad Sazavou in Moravia). Arriving at the ticket office at about 3:00pm we were told that we were too late and would have to come back the following day. Ben tried to win her round but without luck.

We were about to leave when an old gentleman with a stick came in, and (presumably having been told the same thing) began a heated argument with the woman at the desk. He won, and we were able to accompany him to the Church. He turned out to be the curator of the Norwegian section of the National Museum in Prague (or something of the sort) and was acting as a tour guide for a rude American with a big camera.

The architecture of the church was quite amazing. It looked like it had been designed in the 1930s rather than in 1719 . 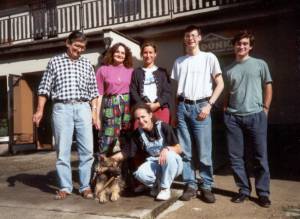 The French girls had a book with youth hostel details so there was no need to stop early to find a bed. We went to see another castle before trying to find a small village where the hostel should have been.

We found the village but there was no hostel. We went into the pub and one of the locals offered to show us a local hotel. The hotel was actually closed but the owners kindly opened it up for us, and we were joined for dinner by the hotelier, his wife, and a number of locals from the pub. 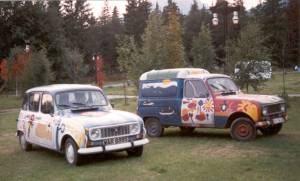 The French girls toured with us for a few days, and we went to look at some more castles, plague columns, and caves. They had to make their way back towards France and we continued to the Tatra Mountains in Slovakia.

We were surprised to find a second psychedelic Renault 4 in the campsite. We went to a local pub for dinner, but the pub closed at 9:00 so we had an early night. The campsite was at a pretty high altitude and ice had already frozen on the sides of the tent. It was a very cold night, and I woke up with a cold the following day. 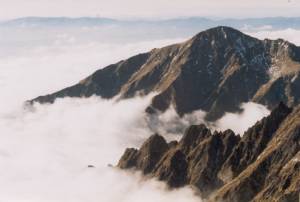 The Tatra Mountains are the most expensive area in Slovakia, due to their popularity with Russian tourists. There was a cable car to the top.

The station halfway up the cable car was in the cloud, and we wondered whether to continue up the mountain or stop in the cafe. We decided to continue, and the cable car took us above the clouds to a wonderful panorama. 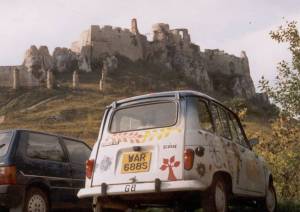 This is Florence outside Spisky Hrad (Spis Castle) in Slovakia about 70 miles from Russia. This is as far as we got.

Spisky Hrad is very a very impressive ruin which the locals appeared to be in the process of rebuilding.

Several months later I watched a film called Dragon Heart and thought the scenery looked a bit familiar. It turns out the film was made in the area and Spisky Hrad features in some scenes. 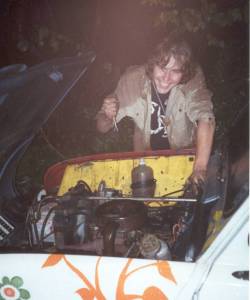 Breakdown on the Way Home

The folowing is an account from the diary we kept of the trip:

"Started to rain. Still foggy. As the afternoon wound on either the hills got steeper or the car got weaker. Since nobody else seemed to be having a problem we assumed the latter. Got as far as Cologne and stopped to investigate.

The distributor was full of aluminium filings and binding badly. We found that one of the circlips holding an advance weight had broken....found that by a suitable bodge the advance weights could be removed and the distributor could be jammed together at roughly 90 degrees to the original position. Put car back together, set timing, and tried logical HT lead arrangement. Didn't work. Tried 3 illogical arrangements. Tried logical one again - worked! Pinked at low revs but OK at high revs. Drove to campsite in rain in 3rd gear."