I've been going a bit mad lately. I've decided to sell my luxury executive Peugeot 406 turbo diesel and replace it with a Renault 4 after a good few years without one

Mind you it is one of those top of the range GTLs which comes with errrm... oh yes, a lockable petrol cap. I must admit I had been kind of hoping for front headrests too. 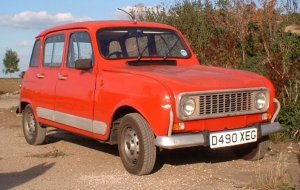 The last owner had spent a crazy amount of money on the car. The dealer he bought it from mislead him on the condition of the dreaded rear chassis legs and charged a mint. Cosmetically it is poor with faded mismatching paint and a dent in every panel, however the panels are virtually rust free and are original. In fact I could hardly find any evidence of rust at all. The rear bumper has been dinged at some point and the repair has involved removing the affected section. 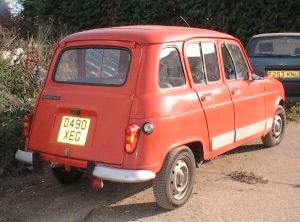 This is the best bit - Rosalie has a tartan interior! And a brand new Kenwood removable stereo complete with speakers concealed under the front seats. I lifted up the rubber mats and found soundproofing too. There is no evidence of water having ever entered the interior of this car - the floors are immaculate! This must be unknown for a R4 - Florence the R4 used to make sloshing noises when cornering. 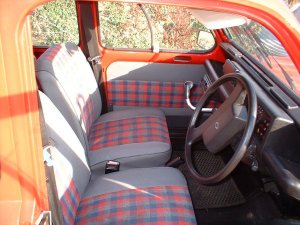 The engine has covered only 61,000 miles and shows evidence of servicing, has a new radiator and one of those fuel ionisers. I'll probably try to sell it on as it's fitted where the fuel filter should be. The only problem I have found is some oddness where the gearlever goes into the box which will need looking at. The inner wings are the originals and are virtually rust free. 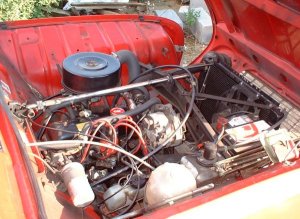 Here is the downside - the rear chassis has severe rust close to the suspension mountings - odd for a car that passed an MOT three weeks ago. I nearly walked away from the car when I saw this as it's a pain of a job, but figured that as the rest of the car is very good it's probably worth repairing. I'll have to get around to the repair soon before the rust spreads into the bits I'm hoping to weld to. 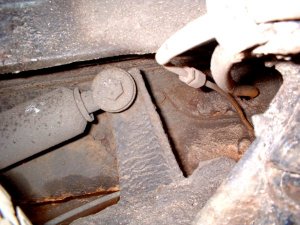 Rosalie has been sold. Robert bought the car to replace a scruffy Citroen AX. I've a feeling Robert will look after Rosalie - he spent the weekend sorting out little jobs on the car that I had neglected to do - he wired up the reversing light that I fitted more than a year ago, and even replaced the points with my brand new set. Robert shares my workshop where he is repairing a Rochdale Olympic which was severely damaged in a crash in 2002. 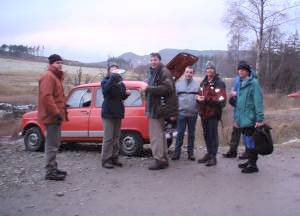 Rosalie carried 5 of us to the base of Schiehallion on New Years Eve for a very odd walk. The summit was in cloud which froze onto our hair and clothes as we walked. Every now and then climbers would emerge from the mist armed with ice axes.

Rosalie overtook Carlo's Peugeot 306 on the way back to the Lodge.

I've kept the grey tartan interior for Ermintrude the Renault 4. Rosalie is now fitted with a tan interior (which is in much better condition but doesn't suit yellow at all).