Ornella is probably the only rust free early Renault 4 in the UK that you can just jump in and drive away. I sorted out the suspension and engine, and tidied up the engine bay after I bought her, but then hardly used her. With the Gordini nearing completion Ornella has found a new home in Southampton.

You'll probably be thinking these early cars must be fun around town but rubbish on the motorway. In fact the opposite is true.

On the motorway Ornella will cruise happily between 100 and 110km/h which is faster than the trucks. Top speed seems to be around 115km/h and the top gear ratio is the same as the later 4 speed 850cc cars. Long journeys are slow but surprisingly relaxing.

In the town the very low straight cut 1st gear and the big gap between 1st and 2nd makes for slow progress from rest. It's not a problem in itself, but the slow starts can upset other motorists particularly in the UK where I sensed some bad karma.

That is probably the most significant difference between the early 3 speed cars and a GTL in terms of living with the car - the 3 speed cars are not for every day driving apart from in rural France where everone is nice. 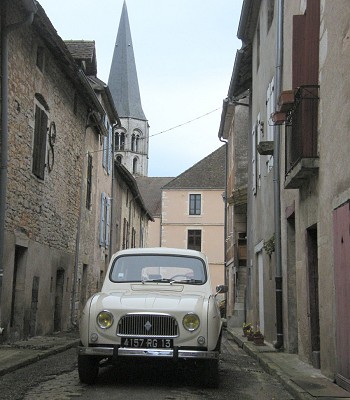 Ornella was manufactured in May 1965. That means she has the 747cc engine.

The 4 devils in the photo represent 4CV (French fiscal horse power). The 1966 model year cars (manufactured from July 1965) were 850cc and had 5 devils on the rocker cover. 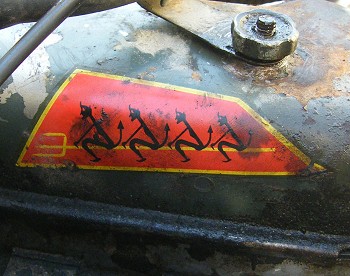 Ornella was owned by a curé (priest) in an abbey somewhere in Provence in the south of France. The curé owned Ornella from new for 40 years. She was always garaged and covered only 94,000km in those 40 years.

She was bought by a collector who repainted her. All of the original wings were retained, the dents knocked out and smoothed with filler.

The collector sold the car to a carpenter who ran the car for a year before he sold her to me to raise funds for some new tools. 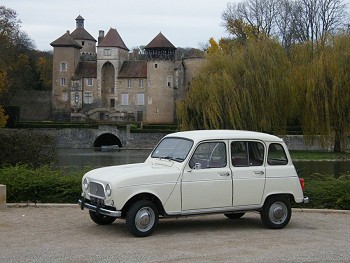 I bought her because I already have a very original 1965 car which I love, but that even I would admit is beyond any practical restoration.

I had been finding new panels for a long time, but even with them the restoration would have taken several years and I could never have achieved the standard of an original car.

Sometimes it is better to take a shortcut. 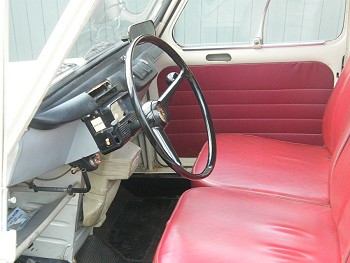 A restored car could not possibly have the original features found on Ornella. There are still the remains of the gearchange pattern intended to instruct the first owner on how to operate the gearbox on their drive home from the dealership.

It's not a sticker - the diagram is painted onto the windscreen and would presumably be very easy to wash off. 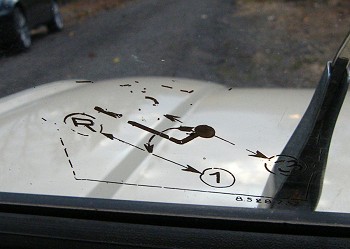 She's not perfect though. There is a nasty dent in the rear bumper and sadly (but presumably not un-related) the boot lid has been replaced with one from a later car that does not have the correct welded on hinges. I later replaced the bumper but am yet to find a bootlid.

While the repaint has been carefully carried out with no over spray at all, it doesn't extend to the interior or the underneath. Much of the original paint has worn off the driver's sill through 40 years of visiting parishioners. 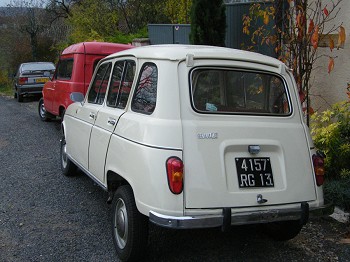 It's still possible to see the paint code printed on the inner wing behind the starting handle. I have already tried starting the engine with the starting handle (with my thumb positioned on the same side of the handle as my fingers to avoid broken thumbs on backfire).

At the moment it is only possible to start the car using the starting handle when it has previously been started with the starter motor. But at the moment the engine isn't working well. 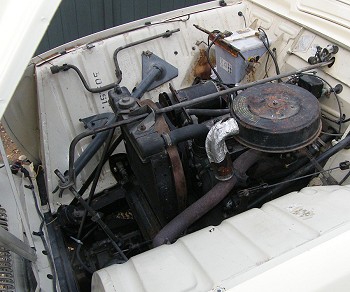 The valves had a good clean on the 1,500km drive from Avignon France to Bedford UK. I bought the car with 96,000km on the clock, and the photo was taken in Bourgogne during a stop for servicing and adjustments.

I didn't use any valve additive as I'm reliably informed that 850cc cars don't need it, and the 750cc engines are very similar. Also I wasn't driving quickly and the valves did need a good clean. The idle is much improved after the trip. 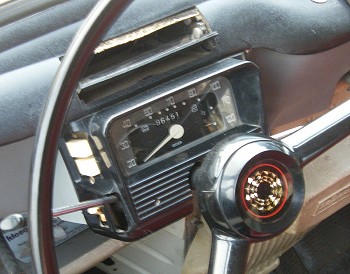 I'm convinced buying a car from France is a great idea. Saves all the those rust repairs. Though there are a few things I have learned.

It's a long drive home, so check everything while you are at the vender's house. The oil level was dangerously low in Ornella when I picked her up despite assurances of a service the previous week.

Also arrange to take a holiday nearby where you can sort out all of the normal bad mechanicing like points with a 1mm gap and way out timing. It will make the car much easier to drive back to the UK.

Cars over 25 years old can be registered as collectors cars in France. This makes them control technique exempt, but it also means they are not allowed to travel beyond the adjoining department. Ornella was CT exempt, and while nobody stopped me on my trip home, the lack of CT for several years meant a fair amount of work would be required for a UK MOT.

Some things were simple like the windscreen washers which have been replaced by a bolt, and a fault with the horn switch inside the instrument pod. Also I need to fix trickier things like an incorrect driveshaft that doesn't locate the hub bearings, a missing steering rack boot, a brake master cylinder leak, and some badly made track arms that foul the steering rack. 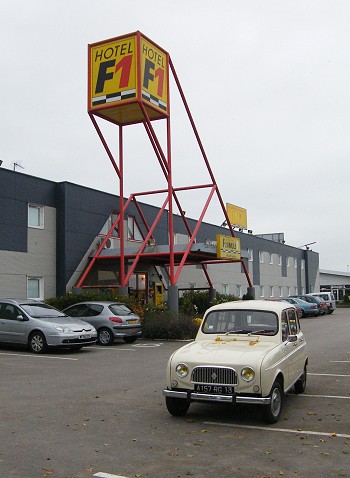 Having taken an elderly Renault 4 from her rightful home I am left with some responsibilities. The underneath has only survived for so long because it's been in a nice hot sunny place.

Now that Ornella is in the damp of the UK I'm going to work underneath to seam seal and paint all of the open seams, especially the joints where the outer wings join to the body. Even after that Ornella will be garaged and won't be allowed out in the winter.

The line of rusty looking ovals shapes to the right of the photo is interesting. Guess which continental motor manufacturer forgot to weld the boot floor in place and had to go around with a spot welder after paint! Bet they thought nobody would bring that back up 43 years later! 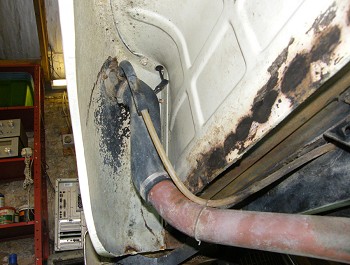