Drag Racing in a Renault 4

I live less than 10 miles from Santa Pod, yet this is the first time I've been drag racing. It's wonderful fun - they do a "run what you brung" thing where anyone can drag race in any car.

We 'brung' a Renault 4 and weren't the slowest car there.

Clementine the Cat and Frederick the Frog are both on holiday at the moment, so very little preparation was made to the Renault 4, other than some weight saving made by failing to refit the rear seats (which have been missing since January). 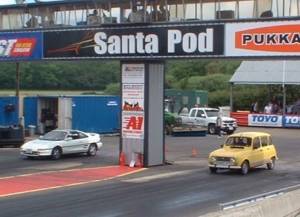 Robert got to drive because he was organised enough to have 'brung' along his driving licence.

Here he is lined up on the start line against a Toyota MR2. The commentator seemed quite pleased to see a Renault 4 and recounted an amusing story about an Australian friend who enjoyed off-roading in Renault 4s. Hey, that's an idea... 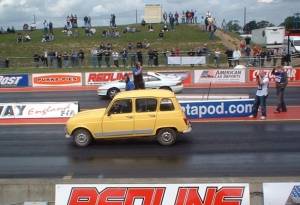 Robert matched the MR2 off the start line, but it started drawing away. Probably because it has more than 34hp.

Mind you, the MR2 only finished the quarter mile 6 seconds faster than the Renault 4. This was the first of three runs. 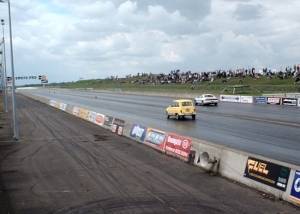 The second run was our best time of the day. Drag racer Robert was up against a highly modified 1970s Toyota Celica that had been setting sub 10 second quarter mile times. The Celica decided there was too much competition and defaulted. So Robert won.

Robert covered the quarter mile in 21.438 seconds with a terminal speed of 59.14mph.

Our third run was a little slower due to an increasing head wind. 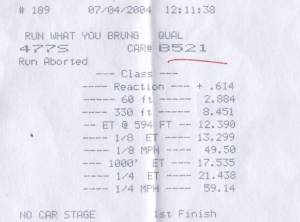 We were far from the slowest vehicle on the track - a VW Bus and a Vauxhall Viva were slower than the Renault, and there were a surprising number of cars that were just a second or two quicker.

The Crapri (pictured) was one of the faster runners. It raced against the Vauxhall Victor (below). It's quarter mile time was about 8 seconds, but it had problems getting off the start line so the Victor kicked ass. 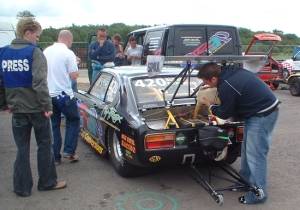 Much of this Chevy Bel Air looked like it was still made from steel, so they did extremely well to achieve a 10 second quarter mile.

These cars tend to have a tubular chassis with a fibreglass body on top. They were immaculately prepared. 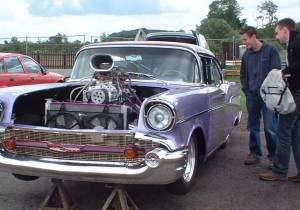 Andy Frost's Vauxhall Victor was the fastest car we saw race - covering the quarter mile in around 8.8 seconds.

These guys cheat a bit on the horsepower. Our little Renault has 34hp. These guys have Nitrous Oxide injection that provides more than 34 times that much power. We can forgive Andy - it was his birthday. 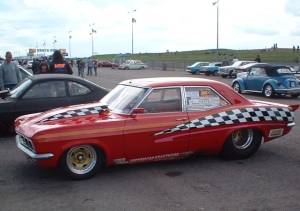 This Beetle was excellent and very fast. As the commentator pointed out, the front end is fibreglass, so much of the rust is just for show. 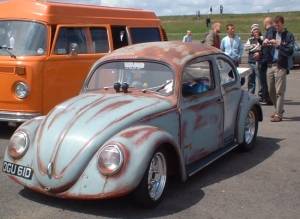 I can see how this drag racing business could become addictive. Next year my MGB V8 should be back on the road. It's pretty modified so should be capable of a 14 second quarter mile. (Turned out to be 14.6 seconds).