I had identified a few faults with Ornella on the drive home from France. She steered wildly to the right when she went over bumps, her clutch slipped, and she was reluctant to idle (and was also embarrassingly reluctant to restart when she stalled in traffic).

Also the lack of rust proofing that works in the South of France wouldn't have worked in the UK. Some winter fettling was required.

Ornella had been fitted with some replacement suspension parts from later cars. This had been a bad move as the suspension changed completely in 1968 and the later parts don't actually fit. At this point I was aware of later track rods and a later driveshaft that allowed one of the wheel bearings to wobble.

These are parts that would need to be removed anyway if the engine were removed, so I thought I'd fix the clutch at the same time. 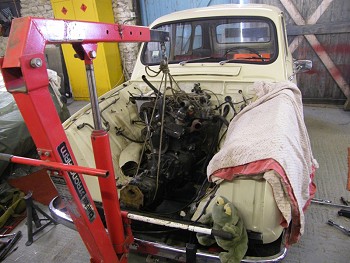 The clutch had been replaced in the past, and while the parts used were probably sold as suitable for the early R4s they weren't. I had a lot of fun with the clutch and ended up changing the whole thing for an original Renault clutch recovered from a 1967 car.

I suspect Ornella's replacement clutch had been sold as a direct replacement for the original, but the actuation plate was the wrong size and it had destroyed the release bearing. 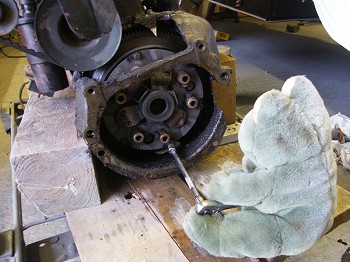 While the engine was out I repainted it. But I can't say my paint match was very good. I took the rocker cover into the paintshop for a match, but the paint had discoloured with heat and become a little blue.

In hindsight I should have taken the gearbox in as that's still in it's original paint. 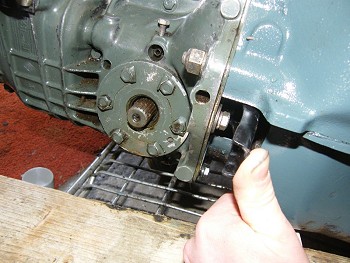 Suspension parts for pre-1968 Renault 4s seemed to be almost completely unavailable when I looked. Probably for this reason Ornella had been fitted with post-1968 driveshafts, steering arms, and on one side an upper wishbone.

There was a change to the front suspension castor angle in 1968, from 7 degrees to 13 degrees, and the later upper wishbone (in the photo) was the reason the car had steered to the right over bumps - I had a different castor angle on each side of the car.

I had new driveshafts in my own spares stock, managed to buy a single track rod, but all of the other replacement parts were removed from a 1967 UK car that had rusted beyond redemption. 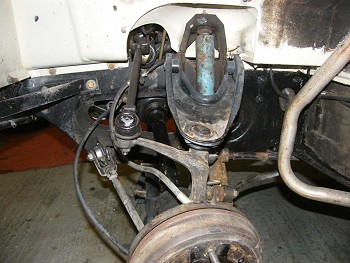 More to come - some details of the rust proofing, and finally UK registration!