It's only a problem in the winter, but one I'm keen to avoid. So while it's tempting to attach a K&N air filter to the carburetor I've decided to move the battery to the bulkhead and use the space to fit a full sized Gordini air filter with a little flap to control whether hot air is sucked from around the exhaust manifold or cold air from the front of the car.

The decision to include an air box in the this car has influenced much of the other packaging in the engine bay. I could have had things much easier without it.

Here's a positioning trial of the engine bay (the bits of wood are holding everything in approximately the right place).

I've gone for the original Renault 5 Mk1 Gordini air box, but it will be mounted forward of the carburetor rather than beside it.

The hose from the air box to the carb is going to be a tight fit against my new stainless steel "strut brace" (with the actual struts been mounted to the chassis it's probably better to call it a gear change mounting). 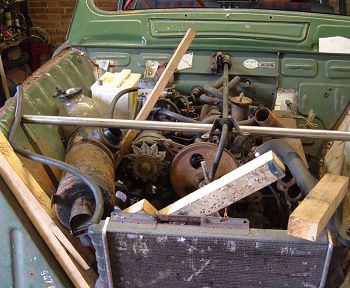 Clearance to the alternator on it's fullest outward adjustment was a little tight as the inner wing turned inwards in front of the expansion bottle.

It was a problem easily solved - cut out the offending piece of inner wing. 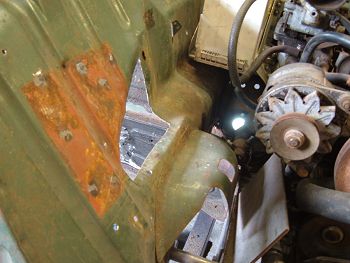 I'd originally planned to weld the mounting for the airbox directly to the inner wing, but decided the resulting tight spaces would cause problems with sealing and painting later on. The plan changed to a bolt on bracket. 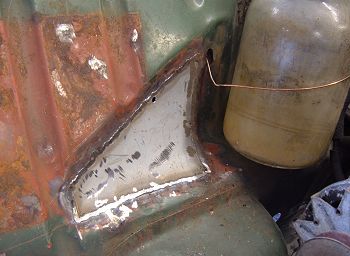 Air inside the air box is very active. Each time the inlet valve closes a pulse reflects down the intake system and causes the air box to vibrate. If the air box were bolted directly to the body then that vibration could be transmitted back to the cabin and cause booms.

Rubber bobbin mountings would work, but this air box will need to be removed every time the brake master cylinder needs filling or the oil filter changing. It needs to be quick release without any nuts and bolts that can rust up.

My solution is to use the rubber bands from the GTL expansion tank to hold the air box, and to isolate the airbox from the mounting by sitting it on soft foam. 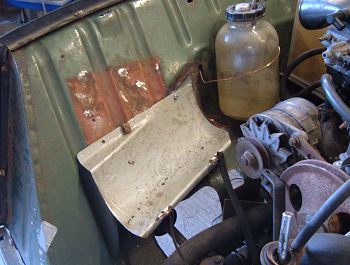 Then disaster struck. I'd been looking for a forward facing plastic top for the carburetor for some time. Finally one turned up on eBay, but it turned out to be 1 inch too tall.

Faced with the choice between custom fabricating a new one from aluminium, or using the original side facing Gordini one I opted for the easy option.

The inlet pipe (I'll buy a proper one later) fits past the expansion bottle if the bottle is propped out from the wing a little, and if I use a smaller battery. (That's a cardboard mock-up at the bottom of the photo with the word "battery" written on it to make it look more convincing). 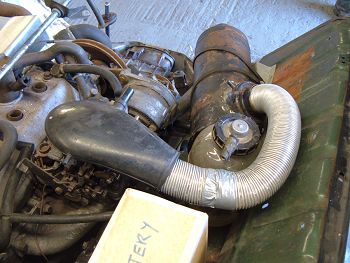 The outlet end of the air box needed to be modified a little to suit the new hose position and avoid the strut brace. The modification was surprisingly complex.

I chopped the top off the airbox, twisted it around by 90 degrees to allow clearance for the little pipe that sticks out the side, angled it to about the right position, then welded everything together with a very oddly shaped spacer added between the original top and the airbox. 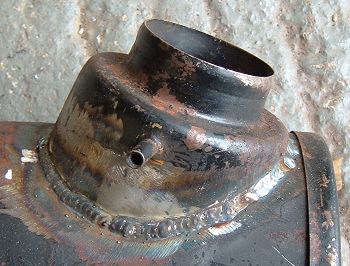 Here's the airbox and temporary pipe work in it's final position.

Turned in to a slightly more involved job than planned, but i've quite enjoyed the challenge. 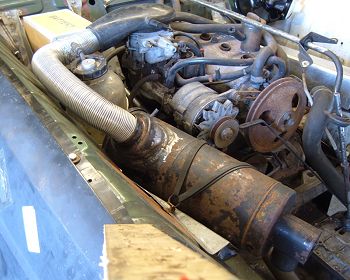 Next> Aluminium exhaust heatshield, or back to the Gordini Project