It's very common on early cars to have rust along the line of spot welds holding on the apex panel between the front door and front wing. That's because Renault didn't seal the join to the panel on the other side of those spot welds.

Of course this bodyshell is 40 years old which probably doesn't help much either.

The space behind the apex panel is exposed to water and mud from the front wheels. The area wasn't sealed by the factory, and the corrosion in the photo was caused by water finding it's way into the seam and pushing it apart. 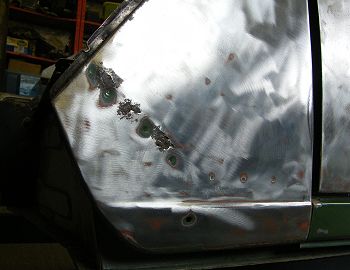 This doesn't entirely work. The apex panel is fairly flat and very poorly supported. Any welding on the panel distorts it out of shape, and the lower part either pops too far inwards or too far outwards. Trying to panel beat everything back into place just made things worse. 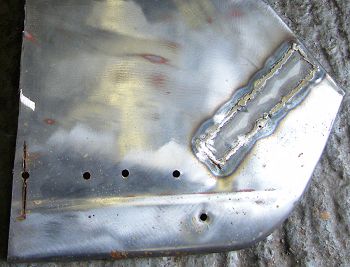 But fear not - new apex panels are available from DerFranzose.de. They are good quality as well - made by Arregui.

This is a replacement panel for pre-1981 cars like mine, though the parts ought to be useful for repairing the GTL. The shape didn't change in 1981, but the later panel extends to form the outer part of the A pillar. 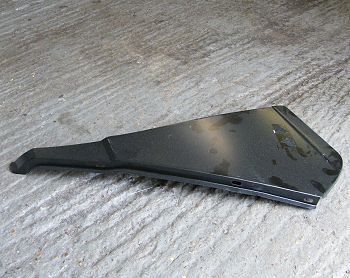 The old panel was roughly cut out using a 1mm cutting disc, then the spot welds on the remaining bits were ground off with the angle grinder leaving all the other panels intact. 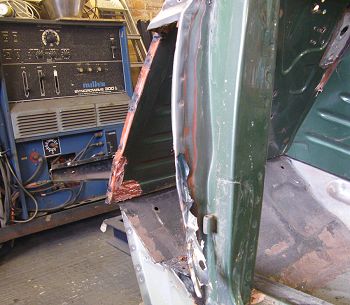 The inner panel had rusted at the edges. New ones are probably available, but I repaired this one. Partly because the join at the bottom of the A pillar is brazed and I didn't have oxy-acetylene to melt the braze off. 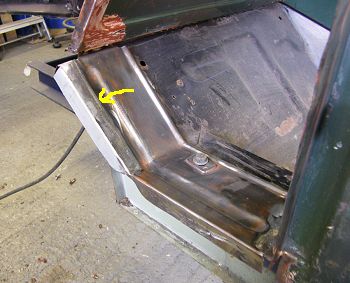 The upper part of the apex panel wasn't too bad on my car, and I didn't want to remove the door hinge. So the lovely panel was cut down to the waist line.

The holes are for plug welding, the idea being to weld through the holes to the panel behind, then extend the weld to the outside of the holes to join this panel. It's a DIY MIG welding alternative to spot welding.

The bottom of the panel didn't line up with the sill very well, so I slit the flanges, bent it, then rewelded to get decent alignment. 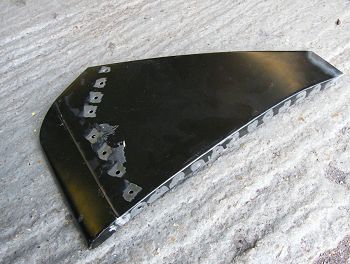 The trick with welding this panel (or any panel) is to allow it to move as it gets hot while you weld it in place. If it was held solidly around the edges and then welded some more the heat would expand the panel, and with nowhere to go it would bend permanently. On cooling it would bend some more.

To allow movement I started at the top, worked down the rear edge to get alignment with the door, then welded to the inner panel near the bottom. Only then was the front edge was welded in place. 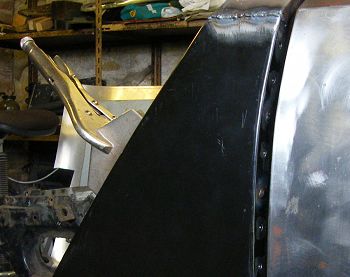 The original panel didn't follow the contours of the door very well. It was too flat. I did the first few welds down the rear edge with the bottom of the panel sticking out a little, then gradually pushed it in as I went lower down .I don't know if my door is the right shape, but the apex panel now matches.

The door was fitted, removed and refitted several times during this work. With the early external door hinges this was a breeze. 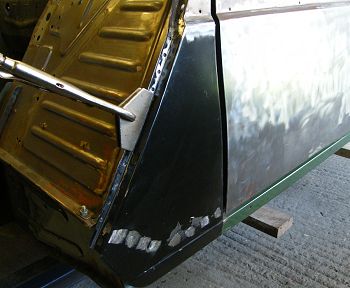 I wish I had a spot welder. There are very few cars that ever had spot welds through the middle of an external panel, so they are an historical curiosity that are a shame to lose. Only a spot welder could have reproduced the effect, and I used MIG so will need to fill over the panel.

Apart from that I'm very pleased with the result. The bottom edge of the panel doesn't follow the line of the sill especially well, but I'll have a chrome strip along there that will detract the eye from this small fault.

I'm very pleased with the Arregui panels. Last time I repaired an Apex panel was after a wheel had fallen off Florence. The UK sourced panels I used were very hard to work with. 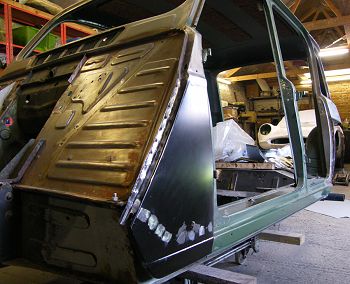 Next> Boot floor repair, or back to the Gordini Project