Getting ready for painting

I've reached a tedious stage in the restoration.

Most of the welding that remains is fiddly, and the paint needs to come off completely (the shell was resprayed at some point, and it was a reasonable job but there are problems underneath the new paint I'd like to sort out).

The big bits have been positioned in the engine bay. I've still got to do a lot of the little bits which will probably happen over winter as painting can't start until the weather warms up a little in the spring.

I'm keen to drill all the new little holes that will be needed and weld up the ones that won't be needed before painting. 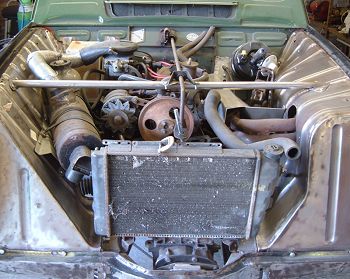 I'm planning to strip the whole shell down to bare metal before painting. Paint stripping is a great distraction from doing some of the other fiddly bits, and I've found a really quick way of doing it - see paint stripping with clean & strip discs.

There will be more on that later. But progress will slow as paying work will take more of my time over the remainder of this year. 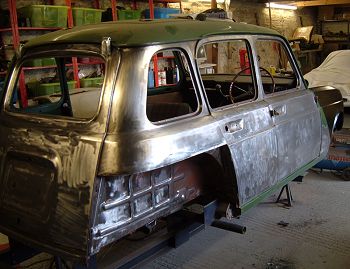 I'd wondered whether to pay someone else to do the job. Chemical dipping seemed like a good idea, but I don't believe it is possible to wash the acid out of seams afterwards. There are friendly forms of shot blasting - media blasting using walnut shells for example, but blasting would need to be done at low pressure to avoid denting the panels, and slowly to avoid heating and warping the panels.

I decided on the technique linked above for the flat panels, and now have my own sand blasting kit for the fiddly corners. 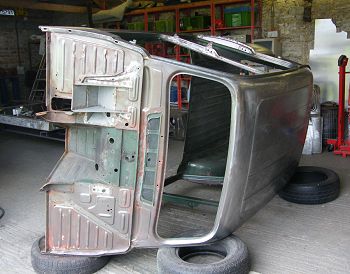 Leaving bare metal exposed for a long time in the UK is never a good idea. I've discovered Gibbs Brand. Kind of like WD40 in that it is sold as a spray on lubricant and you can wipe it over bare metal to stop rusting. It's unlike WD40 in that you can paint over it! I did an experiment and you really can paint over it! It's kept the bare metal protected for the last 6 months, but I'll be cleaning it off as much as possible before paint.

You can just about make out the rear crossmember to the left of the photo. There's not much left of it and the rear of the boot floor is very thin . I've been having trouble buying a repair panel, but the very weekend i stripped all the underseal off the boot floor a complete replacement floor became available. 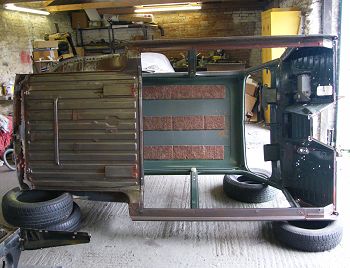 Work still to do before paint includes the rear of the boot floor (totally rusted on this car), the rear upper wing repair on the other side of the car, and sorting out the seams on the apex panels at the front. And all the other bits of course.

Next> Front apex panel repair, or back to the Gordini Project