The engine originally fitted to my project car was 847cc with around 29hp. I plan to fit a 1387cc Gordini engine with 93hp (more than 3 times the power). It could be a straightforward conversion on a LHD car using the Renault 4 gearbox, but the steering column gets in the way on RHD cars, and besides I'm using a 5 speed gearbox. Also there's the airbox and heatshield to sort out. But this page is about the engine itself.

I don't plan to rebuild the engine. Engine rebuilds can get expensive and this engine already runs quite well so there's no urgency. But the engine is a bit messy and hasn't run for about 10 years so I'll fiddle a little before installing it into the car.

It's a cool engine. By the time it was built Amédée Gordini had long since sold his company to Renault, so the design was by the 1970's equivalent of Renault Sport. They wanted a cross flow design with hemispherical (hemi) combustion chambers, but due to manufacturing costs weren't allowed to alter the block.

Instead they came up with a new cylinder head with two rocker shafts which allowed the inlet and exhaust valves to be angled for improved flow. It's the push rod version of a twin cam engine, and everything is achieved apart from an the extra 1000rpm in rev range that twin overhead cams might provide. 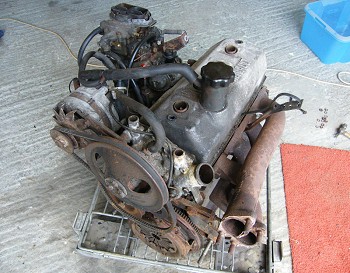 The engine came out of a Renault 5 Gordini that I bought after it failed to sell for parts on eBay. The car itself is completely rotten having suffered from extensive badly done welding in the 90s, and it's now possible to remove body parts (such as the sills) just by tugging on them a little.

I got it running using an expansion bottle tied to the windscreen wiper as a temporary gravity feed fuel tank, and the engine seemed to be in good condition with plenty of oil pressure at hot idle.

After a little test I found it to be a lovely engine. It has none of the driveability issues associated with tuned engines - this one can run along in 5th gear at walking pace, and won't complain even if the throttle is floored. Dropping back a few gears the power smoothly through the revs to the 6500rpm red line (and beyond, which reminds me I ought to fit a shift light to the car). 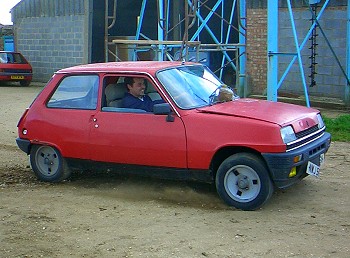 Pulling off the rocker cover for the first time I found everything was covered in a 1mm layer of black sludge. It was still quite fluid and hadn't baked on to the engine. I guess much of it might have been caused by occasional starting over the last 10 years, while running on oil that might not have been changed much over the preceding 10 years.

There are flushing oils on the market, but they are very thin, and I didn't like the idea of such a quantity of sludge being dislodged and working it's way around the engine. I decided to wash it out before fitting the engine. 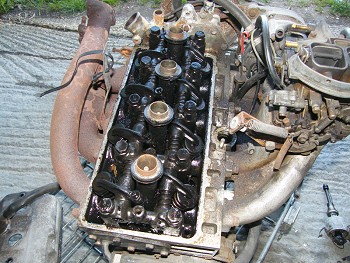 Dismantling the front cover and the sump was easy. The bolts were already very loose. The engine had been apart in the past and the gaskets sealed with silicone sealant. Using silicone sealant inside an engine is bad form! It causes the oil to cavitate (bubble) and bubbly oil doesn't lubricate quite so well as normal oil. Also the whole engine has been painted in hammerite, so it has been out and fiddled with, which is a worry. But I checked the torques of some of the more important bolts inside and they are all good, so I should imagine the gaskets were changed just to fix oil leaks.

I decided a parts washer was the thing to use for washing the engine. They are very useful to have around, they pump filtered washing fluid through a flexible nozzle, and cleaning is quite fast using an old paintbrush or tooth brush. Any big bits of debris are filtered out before the fluid is pumped through again. 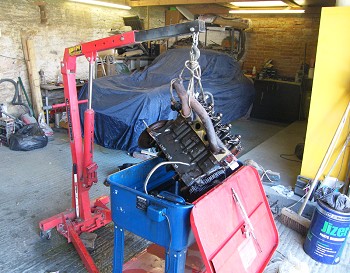 The parts washer removed most of the gunge (the bottom end of the engine wasn't nearly so bad as the top).

It won't have done anything about sludge in the oil ways, but as the sludge was still soft I don't expect any will be blocked. I plan to run the engine with diesel engine oil for the first few hundred miles to clean out the remaining sludge. Diesel engines are much more prone to black sludge than petrol engines, so the oils have a far higher detergent content. That'll help clean this engine out. 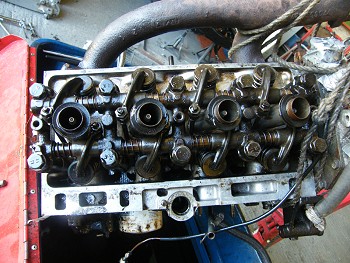 It's always a good idea to fit a complete new clutch while the engine is out. I haven't because I'm short on funds. The clutch plate on this engine is new (ish) but I suspect the release bearing and back plate are original. The starter motor could be replaced too, and they are a pain to change, but again I'm going with the 25 year old original. I have a couple of engines and have been selecting the best bits from each.

Mr_Reno from the forum mentioned that the Renault 5 TX gearbox I had planned to use has a 9:31 differential ratio which seemed a bit low for a big engine in a small car. He swapped me a Renault 5 GTL gearbox with a 10:31 ratio for my spare Gordini gearbox. 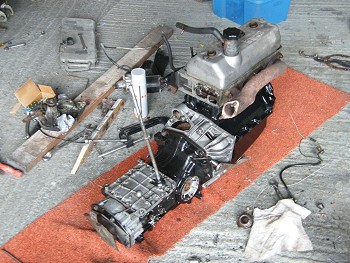 With the addition of some engine mounts, gearbox braces and a waterpump the engine was ready to go in.

And then it came straight back out again. the RHS of the timing chain cover fouled the side of the bulkhead. I had carefully altered the bulkhead previously, as it was designed for the 850cc engine not the wider 1400, but it must have popped back into place while the body was off the chassis. A big hammer against a piece of wood soon had things back out of shape. 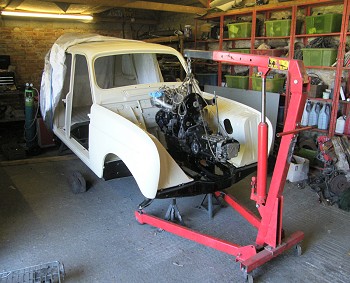 The engine looks completely lost in the Renault 4 engine bay - that's so the mass of the engine and box is as low as possible in this mid-engined layout. When the car is finished the engine bay will be so crammed full of hoses and cables you'll wonder how they managed to find space for an engine in there at all.

The engine is not complete yet. I fitted it prior to fitting the carburetor, distributor, alternator, exhaust etc mostly because of a gasket supply problem. 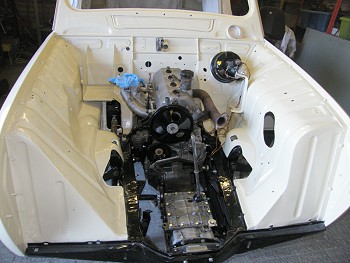 Here's a shot of the completed engine bay. It's not the tidiest installation in the world.

While the engine initially appeared to work it turned out to have a crack in the cylinder head. There's more about that on the engine rebuild page. 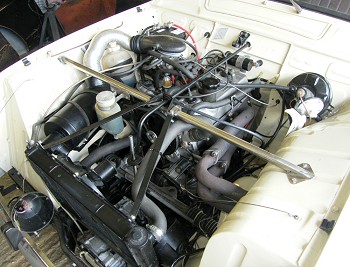 Next> Making the Exhaust or back to the Gordini Project